Mulayam was born on November 22, 1939, in Sefai village of the Etawah district. 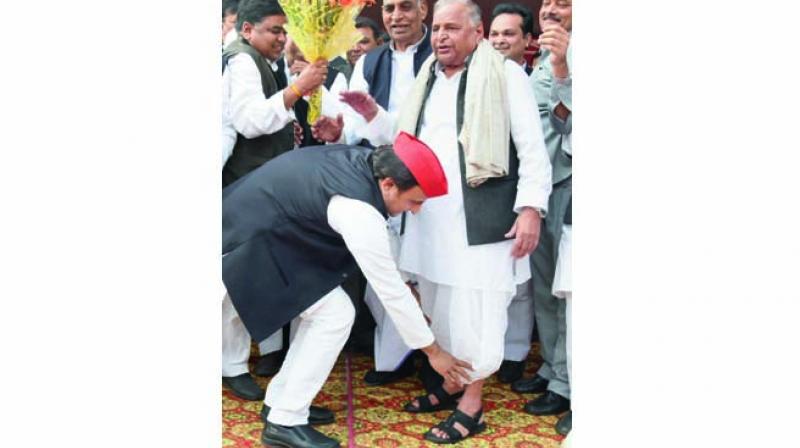 Lucknow: Samajwadi patriarch Mulayam Singh Yadav said on Wednesday that “Akhilesh is a good boy and was also a good chief minister”. Celebrating the 79th birthday at the party office, Mr Mulayam cut a 79-kg cake, fed the first piece to his son and went on to say “Akhilesh is my son first, leader later. My blessings were with him before, now, and ever after”.

Mr Yadav’s birthday was organised by the Mr Akhilesh to send out an “all is well” signal to party cadres but the absence of his estranged uncle Shivpal Yadav was glaring. As soon as Mr Mulayam reached the stage, he was greeted by senior SP leaders present, after which his son and SP president Akhilesh Yadav  put a shawl around his neck and touched his feet. The father patted his son and blessed him, giving a hint the rift between the father-son is now behind them.

The dais was dominated by the younger SP leaders like Sunil Singh Sajan, Anand Bhadauria, Dharmendra Yadav, Arvind Singh Gope, Rajpal Kashyap and Ashu Malik instead of senior leaders.  Last year, the family feud was at its peak around this time and the two factions had organised events to celebrate Mr Mulayam Singh’s birthday separately. The celebrations were called off after the train accident near Kanpur that killed over 100 people. A senior leader of the party, Ram Naresh Yadav, had also died the day before the birthday.

Mr Mulayam was born on November 22, 1939, in Sefai village of the Etawah district.