In Kanpur, SP and BJP workers clashed over the allegations of “rigged EVMs” in Harsh Nagar area. 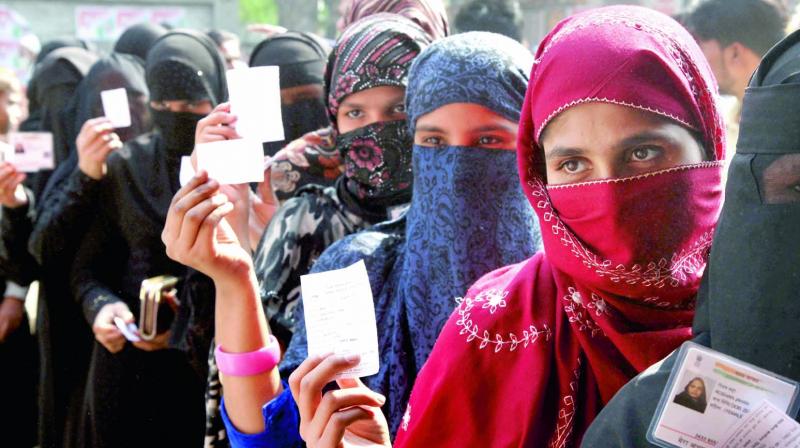 People wait to cast their votes for local body elections at a polling station in Meerut, UP. (Photo: PTI)

Lucknow: Allegations of EVMs being rigged and missing names from voters list led to violence at several  places in the state during the ongoing municipal polls.

Trouble began after a news channel tweeted at 10.30 am that no matter which party you vote for, the button lights up for the BJP. “Button koi bhi dabao, vote BJP ko his jaa raha hai,” a tweet said.

The Samajwadi Party retweeted this information and within a short time, allegations began surfacing from Meerut, Kanpur and several other districts.

In Kanpur, SP and BJP workers clashed over the allegations of “rigged EVMs” in Harsh Nagar area. A BSP supporter in Meerut alleged that he voted for his party, but thelights against BJP and NOTA were flashed. The voting machine was later replaced as people refused to cast their votes in the booth. Allegations of rigged EVMs led to violence in Pratapgarh where an independent candidate was shot at and injured. A case against unnamed persons has been registered and the injured person was referred to Allahabad for treatment.

Additional state election commissioner Ved Prakash Verma said that allegations regarding EVM tampering are false and a part of a rumor mongering campaign. Meanwhile, the Gorakhpur police detained five women who were allegedly paid to cast bogus votes. The women confessed that they had been paid money by one Anup who is now absconding. BSP workers also clashed with the supporters of an independent candidate in Gonda after both parties leveled allegations of fake voting. The BSP candidate was later detained.

In Meerut, the police thrashed a man at Laavad chowk after they arrested his son for allegedly trying to cast bogus vote. Following this, the locals protested in the area, alleging that police was acting under pressure from the local MLA. The police also resorted to lathi charge.

In Ayodhya, a local priest alleged that Samajwadi Party workers were casting bogus votes, which led to violent clashes between their supporters. Apart from BJP MP Sakshi Maharaj, Samajwadi Party MP Sukhram Singh Yadav was also unable to cast his vote because his name was missing in the voters’ list.

State election commissioner Satish K. Agarwal said that the SEC has upgraded voters’ list but it was also the responsibility of voters to check if their names had been included. “The voters’ list was put online and could have been checked. As for faults in EVMs, we replaced machines where they were found to be giving trouble. Reports of EVMs beibng rigged are false”, he said. He said that repoll would be held in one booth in Badaun where some people had tore up papers.