India   All India  23 Nov 2017  We suffer for our sins: Assam health minister on cancer patients
India, All India

We suffer for our sins: Assam health minister on cancer patients

In a tweet, Chidambaram mocked Sarma saying, 'that is what switching parties does to a person.' 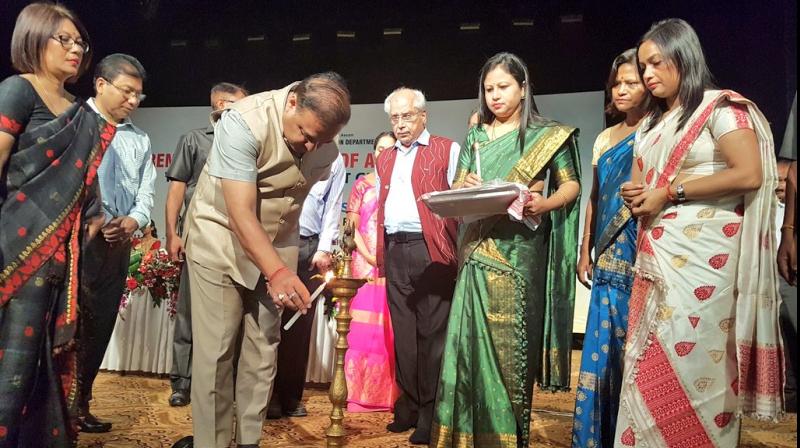 Assam Health Minister and BJP’s northeast strategist Himanta Biswa Sarma made the remarks at a function organised for distribution of appointment letters to teachers in Guwahati on Tuesday. (Photo: Twitter | ANI)

Guwahati/New Delhi: Assam Health Minister and BJP’s northeast strategist Himanta Biswa Sarma has kicked up a storm with his remarks that some people suffer from life-threatening diseases such as cancer because of sins committed in the past which he called "divine justice".

"God makes us suffer when we sin. Sometimes we come across young men getting inflicted with cancer or young men meeting with accidents. If you observe the background you will come to know that it's divine justice. Nothing else. We have to suffer for divine justice,"

Sarma, 48, said at a function organised for distribution of appointment letters to teachers in Guwahati on Tuesday.

He also said, "In this lifetime or in our previous life, or perhaps my father or mother... perhaps that young man did not do anything, but his father has done something wrong. It is mentioned even in Gita, Bible about the outcome of one's actions. No point in being sad... all will get the outcome of this life's actions in this life only. That divine justice always will be there. Nobody can escape the divine justice that will happen."

The minister, who is a law graduate and has a PhD, was advising the teachers to "work hard and be honest," after distributing appointment letters to them.

Reacting to the comments, Congress lawmaker and leader of the opposition in the Assam Assembly, Debabrata Saikia said the minister's comments were insensitive.

"It is unfortunate that the health minister has made such a remark on cancer patients hurting their feelings. As he has made the remark publicly, the minister should also apologise for it publicly," Saikia said.

Sarma, who was with the Congress earlier, had last year switched over to the BJP.

Congress leader P Chidambaram denounced Sarma for his remarks. In a tweet, Chidambaram mocked Sarma saying, “that is what switching parties does to a person".

'Cancer is divine justice for sins' says Assam Minister Sharma. That is what switching parties does to a person.

Sarma responded to Chidambaram’s tweet saying not to distort his statement.

Sir, please do not distort. Simply I said that Hinduism believe in karmic law and human sufferings are linked to karmic deficiency of past life.Don’t you belief that too?Of course in your party I do not know whether Hindu philosophy can be discussed at all https://t.co/P7CMBIRCYQ

AIUDF leader Aminul Islam said Sarma is trying to cover up a high number of cancer cases in Assam.

"He has given up, he can't control," Islam said.

AIUDF leader Aminul Islam asserted that the health minister made this remark to cover up his failure to control the spread of cancer in the state.

Some cancer patients said they were saddened by the health minister's remarks at a time when it is an established medical fact that there are scientific reasons and various other parameters responsible for the disease.

Himanta Biswa Sarma is credited with the BJP's turn of fortunes in the northeast ever since he quit the Congress and joined the party.

Inducted by the BJP months before Assembly elections in Assam, he helped the party win power in the state for the first time ever, uprooting his former mentor Congressman Tarun Gogoi, who was chief minister of the state for 15 years.

Since then Sarma has strategically delivered two more northeast states - Manipur and Arunachal Pradesh - for the BJP.