‘Icon’ not on screens but to debut in books

Chouhan on Wednesday declared that she would make debut in school syllabus in the coming academic session in the state. 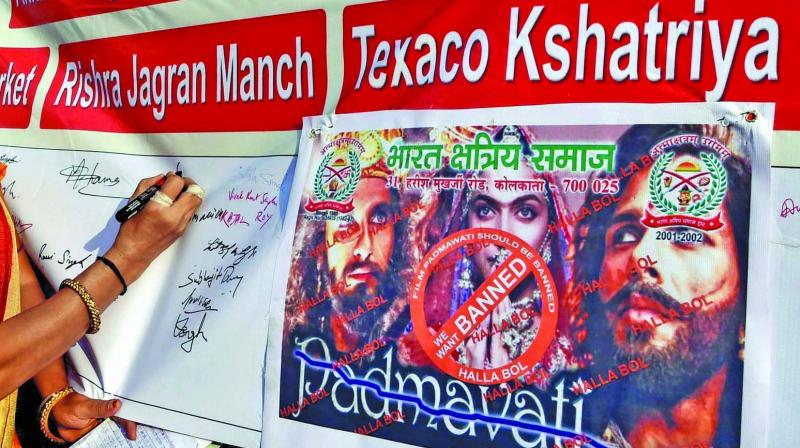 Members of Bharat Kshatriya Samaj take part a agitation and signature campaign to oppose the release of the movie Padmavati in Kolkata. (Photo: PTI)

Bhopal: Amid a raging controversy over Sanjay Leela Bhansali’s Padmavati, Madhya Pradesh chief minister Shivraj Singh Chouhan has gone on a spree to launch schemes in the state to pay tribute to the Rajput “icon”.

A couple of days after he announced to build a memorial for the 13th century Rajput warrior queen as well as institute an award after her name to felicitate those who protect honour of women, Mr Chouhan on Wednesday declared that she would make debut in school syllabus in the coming academic session in the state.

“Story of Padmavati will be included in the school syllabus in Madhya Pradesh in the coming session to ensure that historical facts relating to her are placed correctly before our future generation”, Mr Chouhan announced at Ujjain.

“Our children will draw inspiration from her story”, he added. Earlier on Monday, he made twin announcements of building a memorial for her and also introduce an award after her name to honour protectors of women while addressing a gathering here.

Chouhan declared to ban the release of the movie Padmavati in MP, irrespective of its clearance by the censor film censor board (CFCB), if the “contentious” scenes in the film were not deleted.