The BJP asked Raj Babbar and Congress president Rahul Gandhi to apologise for the remark. 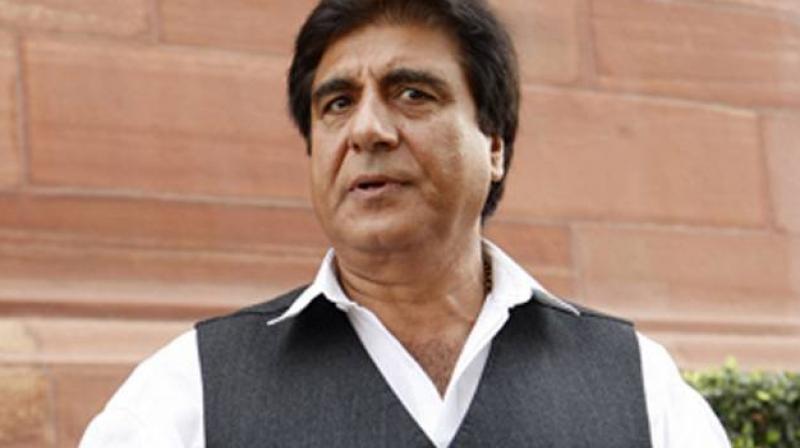 '...We wish to say that now the value of the rupee has fallen to the age of your respected mother,' Uttar Pradesh Congress chief Raj Babbar said. (Photo: File | PTI)

Indore/ Ahmedabad: Congress leader Raj Babbar dragged Prime Minister Narendra Modi's mother into the shrill Assembly poll campaign comparing the rupee's falling value against the US dollar with her age, sparking demands by the BJP on Friday for an apology from him and also his party chief Rahul Gandhi.

The rupee has seen a continued fall against the US dollar this year, hovering a little over the 70-mark on Friday.

Kicking up a controversy, Babbar made the remark while addressing a rally in poll-bound Madhya Pradesh's Indore city on Thursday.

"(Before becoming the Prime Minister) Modi used to say that compared to the (US) dollar, the value of the rupee has fallen to a level where it is almost the same as the age of the then Prime Minister (Manmohan Singh)," Babbar, the Uttar Pradesh Congress chief, said.

"Mr Prime Minister (Modi), at that time, you had not taken his (Manmohan Singh) name out of respect. Although our tradition does not allow this, we wish to say that now the value of the rupee has fallen to the age of your respected mother," he added.

BJP’s national spokesperson Sambit Patra said it was not proper to use unparliamentary words or drag any person's mother into politics.

"Rahul Gandhi should apologise and he should clarify whether he endorses such controversial statements," Patra told reporters in Indore.

Rupani said Babbar's comments were a result of the Congress' frustration as it was losing public support and polls.

"Congress leaders are stooping very low and making such repulsive comments. In politics, people need to behave responsibly. I condemn Raj Babbar's remark," he told reporters in Ahmedabad, "Comparing the value of the rupee against the (US) dollar with Modiji 's mother (age) shows his (Babbar) cheap mentality. Since the Congress is losing people's support and losing elections, their leaders are making such comments out of frustration." "He (Babbar) must apologise to the prime minister," he added.