President's Rule revoked in Maharashtra at 5:47 am

The gazette notification to this effect was issued by Union Home Secretary Ajay Kumar Bhalla at 5.47 am. 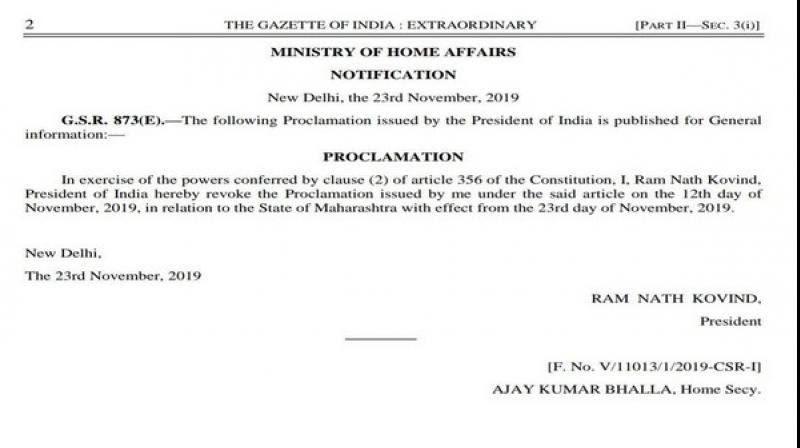 New Delhi: President's Rule was on Saturday revoked in Maharashtra following the formation of a new government in the state. According to a Home Ministry notification, President Ram Nath Kovind issued the proclamation for revocation of the central rule this morning. The gazette notification to this effect was issued by Union Home Secretary Ajay Kumar Bhalla at 5.47 am.

"In exercise of the powers conferred by clause (2) of Article 356 of the Constitution I, Ram Nath Kovind, President of India hereby revoke the proclamation issued by me under the said article on the 12th day of November, 2019, in relation to the state of Maharashtra with effect from the 23rd day of November, 2019," President Ram Nath Kovind said in a gazette notification.

In an overnight development, BJP's Devendra Fadnavis earlier this morning took oath as the Maharashtra Chief Minister for the second consecutive term while Pawar took oath as Deputy Chief Minister of the state. The oath was administered by Governor Bhagat Singh Koshyari to Fadnavis and Pawar at Raj Bhawan.

The BJP, which emerged as the single largest party in last month's assembly elections, could not stake claim to form a government as its ally Shiv Sena remained firm on rotating the Chief Minister's post and equal sharing of Cabinet berths.