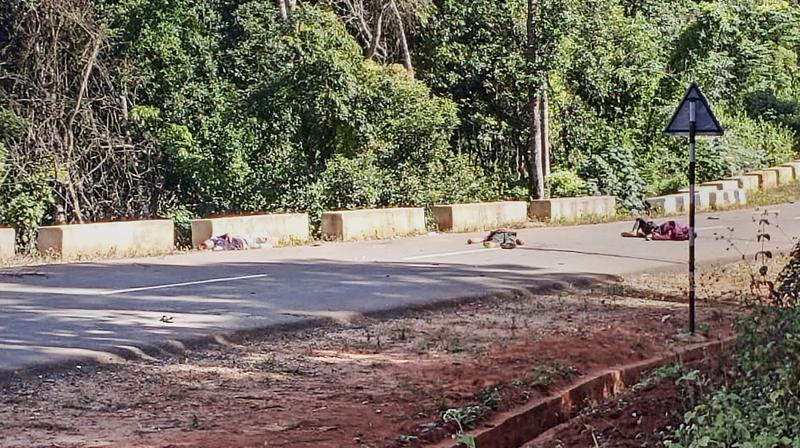 Four people, including a forest guard, were killed in violence at the Assam-Meghalaya border after the police intercepted a truck transporting illegal timber in the early hours of Tuesday. (PTI Photo)

GUWAHATI: In what has triggered tension between neighbouring states, Assam forest guards are alleged to have shot dead at least five people from Meghalaya on Tuesday after the timber mafia attacked a team of the Assam police and forest guards in West Karbi Anglong district of the state, near the border with Meghalaya.

After the violence, authorities suspended mobile Internet services in the border areas of the two states to stop the situation from escalating.

Security sources said that an Assam forest guard who had accompanied the police team also died and scores more were critically injured in the clash.

Meghalaya Chief Minister Conrad Sangma told reporters that six persons, including five from Meghalaya and one Assam forest guard. were killed in the incident. He said the injured were rushed to hospital for medical treatment. Sangma said a magisterial inquiry will be initiated into the incident.

He said that he has spoken to Assam Chief Minister Himanta Biswa Sarma about the incident and he had assured all kind of support in defusing the situation.

Fearing a backlash, the Assam police has started alerting travellers from Assam to Meghalaya and diverted hundreds of vehicles going to Shillong.

The security sources told this newspaper that a timber-carrying truck was asked to stop at a police checkpost at Moikrang in West Karbi Anglong on the Assam-Meghalaya border at around 3 am on Tuesday. The truck, instead, sped away. The police chased the truck and managed to stop it by puncturing one of its tyres. Three people were held and brought to Jirikinding.

The SP of West Karbi Anglong district, Imdad Ali, told reporters that he asked another police team to bring back the seized timber-laden truck from the location. When the police team reached the location they were attacked by a large crowd armed with sharp weapons and sticks. The police had to resort to firing in self-defence.

DIG Davis N.R. Marak, who is in charge of Meghalaya’s eastern range, confirmed the incident and said that he was on his way to the spot.

Meghalaya CM Sangma convened a meeting of top officials to take stock of the situation as the state government notified the suspension of mobile internet services in seven districts for 48 hours.

Some videos that have gone viral on social media purportedly showed an angry confrontation between two groups in the area. One of the videos purportedly shows uniformed personnel armed with rifles charging at a crowd. A person can be heard shouting that the personnel had taken out their rifles. A few seconds later, gunshots can be heard as people flee for their lives.

The incident comes amid the ongoing border talks between Assam and Meghalaya to solve the decades-long border dispute between the two states. As a mark of respect and mourning for the deceased, the Meghalaya government has decided to cancel all official festivals, including the Shillong Cherry Blossom Festival.

The Chief Minister announced that the government would provide ex gratia compensation of Rs. 5 lakhs each, that will be released to the next of kin of the deceased individuals. He had convened a Cabinet meeting in the evening to decide on the next course of action.