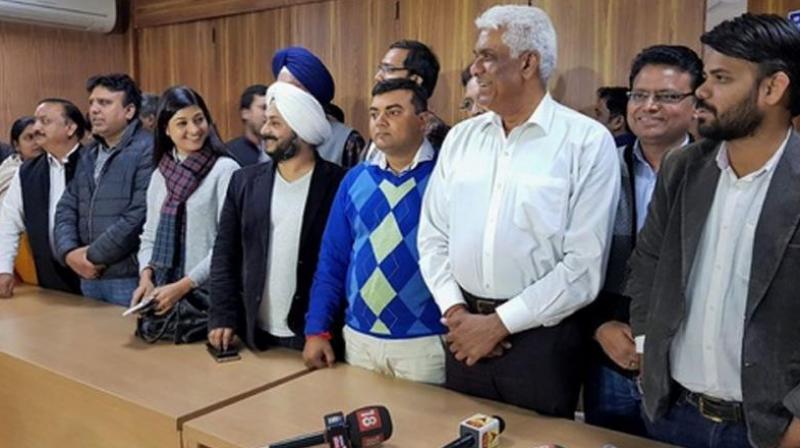 The Delhi High ordered the Election Commission - which disqualified the 20 Aam Aadmi Party MLAs last week- to file its reply on the issue by February 6. (Photo: PTI)

The court also restrained the Election Commission (EC) from taking any "precipitate measures" like announcing the dates for bypolls to the seats held by 20 AAP legislators disqualified from the Delhi Assembly for holding offices of profit till its next hearing on January 29.

In addition, the Delhi HC ordered the EC - which disqualified the 20 AAP MLAs last week- to file its reply on the issue by February 6.

Eight of the 20 MLAs from Arvind Kejriwal-led AAP had filed three petitions requesting that an EC recommendation to the President to disqualify them and the notification issued after President Ram Nath Kovind signed off on it be cancelled.

The MLAs have alleged that the EC recommended their disqualification without giving them a fair chance to defend themselves and asked the court to order the poll body to hear their side.

They also sought that the disqualification be reversed till the EC hears the matter again.

Five of the former AAP legislators argued in their plea that the EC had acted in "undue haste", and without "affording" and "giving any opportunity of a fair hearing" to the petitioners.

The MLAs further argued that the EC "failed to follow due process of law by not offering the petitioners a full hearing before making the final opinion to the President". As well, the EC did not consider that "parliamentary secretary" was a "mere post" and not an 'office'.

AAP insists that its legislators drew no salary or perks as parliamentary secretaries, appointed to assist ministers with their work, and so there is no question of their having held offices of profit.

The court's intervention means that the speaker of the Delhi Assembly does not have to act on the Presidential order disqualifying the AAP MLAs just yet. The EC can move the Supreme Court against the Delhi High Court's order.

Disqualification of the legislators will mean elections will have to be held for the 20 Delhi seats. That will not impact Chief Minister Arvind Kejriwal's government even if AAP loses all 20 seats, since it has a massive majority in the Assembly with 66 of 70 seats.

AAP appointed 21 of its Delhi MLAs as parliamentary secretaries in 2015 soon after it won a thumping majority in the Delhi Assembly polls. One of the 21 MLAs, Jarnail Singh, earlier already resigned.