Cong called for dawn-to-dusk bandh, while the BJP announced to observe a 12-hour strike from 6 AM to 6 PM. 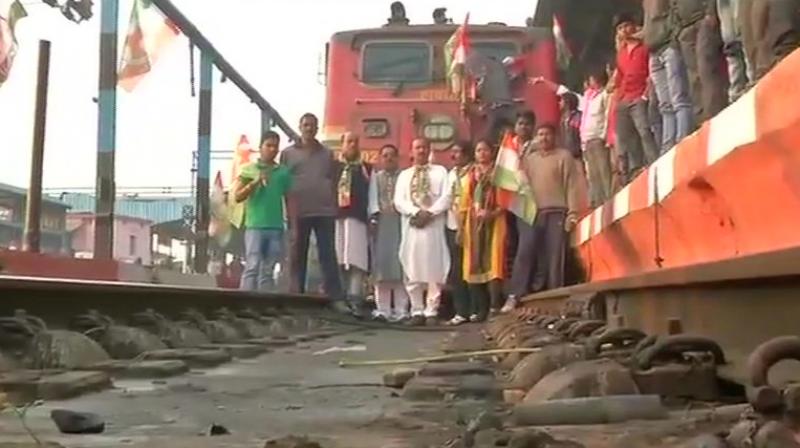 The girl had alleged that she was raped by four men in uniform in Kunduli on October 10, 2017 when she was returning home to Musaguda village, about five kilometres away. (Photo: ANI)

Bhubaneswar: Opposition BJP and the Congress slammed the BJD government in Odisha over the alleged suicide of a girl who had claimed to have been raped by "four men in uniform", staging separate demonstrations and calling for a state-wide shutdown on Wednesday.

A day after the minor tribal girl ended her life in Koraput, Congress called for dawn-to-dusk bandh across the state, while the BJP announced its decision to observe a 12-hour strike from 6 AM to 6 PM.

In view of the bandhs, schools and colleges would remain closed for the safety of students and examinations would be shifted to a suitable date, officials said.

Elaborate security arrangements have also been made, police said.

Leaders of both the opposition parties said the shutdown would be observed to protest alleged failure of state government in handing out justice to the girl and to demand a CBI probe into the incident.

The OPCC chief urged people to support the peaceful agitation against alleged injustice to the class 9 student, who was forced to end her life.

Harichandan alleged that the girl took the extreme step 100 days after the incident as she was mentally tortured by the police and other officials, including doctors.

He also slammed police and its Human Rights Protection Cell (HRPC) for ruling out the girl had been raped, despite the girl claiming that she had been raped by four men in combat uniform near Kunduli in Maoist-hit Koraput district on October 10.

Announcing the call for state-wide shutdown, BJP leader Prithviraj Harichandan said the party would continue its stir till the girl gets justice.

The party had initially called for a strike in four districts in south Odisha.

Meanwhile, stepping up attack on the BJD government, BJP activists, including women wing members, clashed with police while trying to march to 'Naveen Niwas', the residence of the chief minister.

Members of the Congress' women wing also staged a demonstration and attempted to enter 'Naveen Niwas'.

The police have detained some BJP and Congress activists, the DCP said.

"The situation is now under control. We have dispersed the agitators," he said, adding that at least four police personnel suffered injuries as the protesters pelted them with stones. Several BJP activists were injured in the police lathicharge.

The girl had alleged that she was raped by four men in uniform in Kunduli on October 10 last year when she was returning home to Musaguda village, about five kilometres away.

The suicide of the girl also triggered tension in Koraput as local people led by Congress leader Pradip Majhi took away the girl's body from the hospital without allowing officials to perform a post-mortem, officials said.

BJP leader and Union Tribal Affairs Minister Jual Oram has demanded a CBI probe into the whole episode and alleged that the girl was denied justice.

BJP state general secretary Bhrugu Buxipatra urged the people to make the bandh successful "as the girl died after being denied justice".

"The girl had earlier claimed that there was threat to her life. She was forced to take the drastic step of ending her life as she was denied justice," said Congress Chief Whip Tara Prasad Bahinipati.

Meanwhile, Odisha Women and Child Development Minister Prafulla Samal said his department would inquire into the circumstances that led to the death of the girl.

"We feel that the department has some responsibility. Our officers will probe into the cause of her death," Samal said.

Rajendra Dadua, president of Zilla Dom Samaja, said, "The state government did not take her plight seriously and justice was denied to her."

The state government had ordered a crime branch probe and judicial inquiry into the alleged rape.