The highest-level of participation at summit comes after rising Chinese economic and military assertiveness in Southeast Asian region. 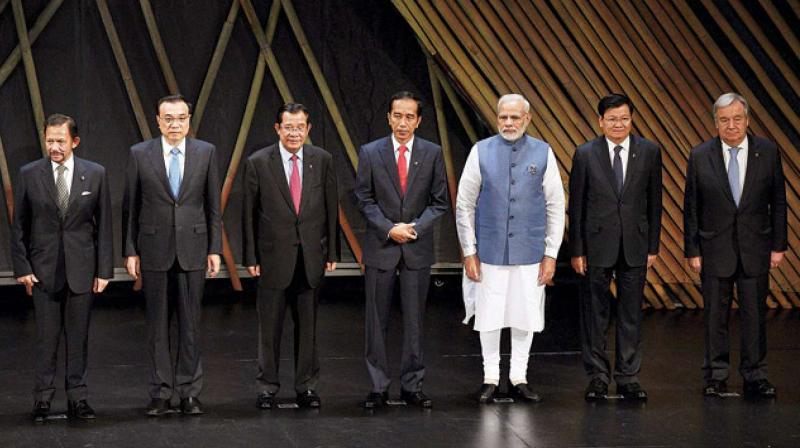 New Delhi: The head of the state of the 10 ASEAN (Association of Southeast Asian Nations) nations have started arriving in New Delhi on Wednesday. Leaders from Thailand, Indonesia, Singapore, Brunei, Laos, Myanmar, Cambodia, Malaysia, the Philippines and Vietnam will be in India for the India-ASEAN commemorative summit that is scheduled to be held on Thursday.

The event will mark 25 years of India's ties with the Southeast Asian bloc.

The highest-level of participation at the summit comes in the backdrop of increasing Chinese economic and military assertiveness in the region.

Not only this, the Republic Day parade on Friday will witness a record setting presence of ASEAN leaders. This comes at a time when India is keen on changing its 'Look East' policy to 'Act East' policy.

"And, by the very presence of 10 leaders from ASEAN during the Republic Day celebrations, India will definitely showcase its 'Act East' policy," Sitharaman added.

Prime Minister Narendra Modi will hold bilateral meetings with the visiting ASEAN leaders. Prominent among those will be the one with the State Counsellor of Myanmar, Aung Sang Suu Kyi, on Wednesday evening.

Trade will be one of the major focus areas at the bilateral meetings and so will greater infrastructural connectivity, regional development in the northeastern states and regional security.

Despite having a free trade agreement in services and investments, India-ASEAN trade for the year 2016-17 was only USD 71 billion, in comparison to the USD 470 billion trade with China.

The Prime Minister will hold bilateral talks with the leaders of Thailand, Singapore and Brunei on Thursday, ahead of the summit.

Modi will also hold bilateral meetings with the leaders of Indonesia, Laos and Malaysia on Friday.

There will be a leaders' retreat during which the leaders will have a "free and frank" discussion on January 25. The theme of the retreat session is 'maritime cooperation and security'.

Following the retreat, a plenary session will take place on the same day.

In the run-up to the summit, various programmes in different areas ranging from culture to trade have been organised by India.

According to officials, before the summit, discussions are also being held between the working groups of India and ASEAN to step up air and maritime connectivity.