Multiplex Association of India said the film would not be screened in Rajasthan, Gujarat, Madhya Pradesh and Goa. 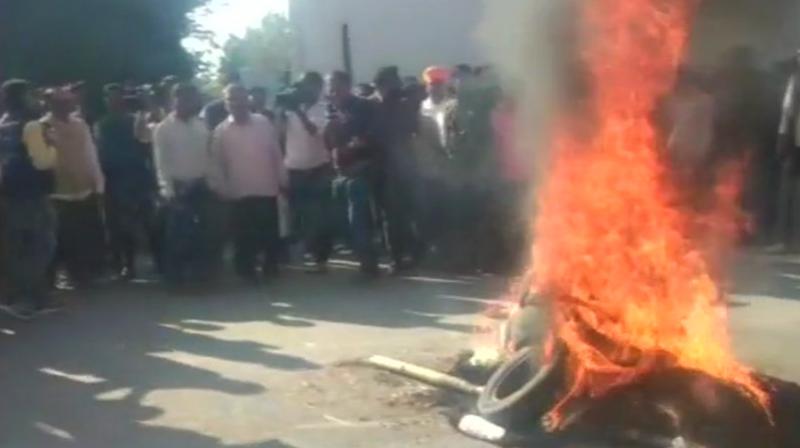 Mumbai: Violent protests spread to towns and cities in many states including Rajasthan, Haryana, Maharashtra and UP, a day ahead of the release of Sanjay Leela Bhansali’s ‘Padmaavat’, as fringe groups opposing the film remained defiant.

A bus was torched and a highway blocked in Haryana’s Gurgaon where protesters violated prohibitory orders while the police had to use force to disperse an agitating mob in Lucknow.

Karni Sena members allegedly damaged two state roadways buses in Jaipur and blocked a road in the city’s Kalwar area scores of activists were held in Mumbai and Nashik.

Meanwhile, in Ahmedabad, the police arrested 50 people in connection with the violence and vandalism outside malls Tuesday night. As many as 30 bikes and scooters, parked outside three multiplexes in the city were set ablaze by protesters.

In a yet another worrying sign for the controversy-mired flick, the Multiplex Association of India, which represents about 75 per cent of multiplex owners, said the film would not be screened in Rajasthan, Gujarat, Madhya Pradesh and Goa.

“We have decided not to play the film in four states - Rajasthan, Gujarat, MP and Goa - as the local management has told us that the law and order situation is not conducive,” Deepak Asher, president of the association, said.

In Gujarat, theatre owners said that the film would not be screened in any of the multiplexes or single screens till the row was resolved.

As protests raged, a defiant Shree Rajput Karni Sena, which has been spearheading the opposition to the Bollywood period drama, sought to pin the blame on film director Bhansali.

The fringe outfit’s chief patron Lokendra Singh Kalvi also insisted that a ‘Janta curfew’ will be imposed on theatres that screen the movie.

He also claimed that Shiv Sena leaders had assured the Karni Sena of support on the issue in Maharashtra.

A Janta curfew will be imposed at any cost in film halls to stop the film’s screening, Kalvi said.

The fringe outfit leader also alleged that a dream sequence between the characters of Alauddin Khilji and Rani Padmavati existed in the controversial film, which, he said, was “intolerable”.

“Those who watched the film on the invitation by the censor board few days back have said that there is a dream sequence between Alauddin Khilji and Rani Padmavati in the film. We have been demanding that there should be no dream sequence and no romantic scene between the two,” he told a press conference in Jaipur.

The filmmakers, however, have assured in the past that no dream sequence exists in the movie.

Kalvi also claimed that a section of media had wrongly reported that members of the Karni Sena had seen the film on Tuesday.

“This is not true and we are firm on our stand against the film,” he said.

Striking a defiant pose, the Karni Sena leader said that he and other outfit leaders may be arrested and bullets fired but the protest would continue in states like Rajasthan, Haryana, Uttar Pradesh, Gujarat, Maharashtra and Madhya Pradesh.

“Janta curfew will be imposed on film halls at any cost. We are getting support of film hall owners and film distributors,” Kalvi said.

The film, starring Deepika Padukone, Shahid Kapoor and Ranveer Singh, is based on the saga of the 13th Century battle between Maharaja Ratan Singh of Mewar and Sultan Alauddin Khilji of Delhi.

The Supreme Court had paved the way for the nationwide release of ‘Padmaavat’ after some states had issued notifications banning the film.

The movie, which was earlier named “Padmavati” and was slated for a December 1 release, will now hit theatres worldwide on Thursday.