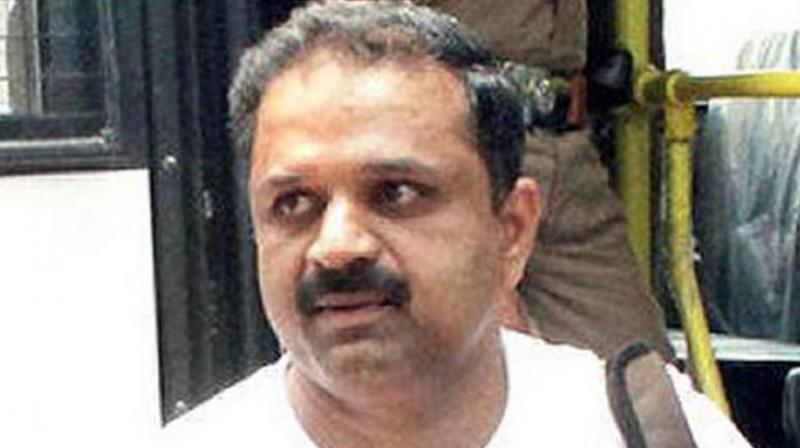 In his application, AG Perarivalan has said he is languishing in jail for the past 26 years. (Photo: File | ANI)

New Delhi: A convict in the assassination of former Prime Minister Rajiv Gandhi has moved the Supreme Court requesting to reopen the case and cancel 1999 conviction order.

AG Perarivalan, who has spent 26 years in jail, was convicted of supplying two nine-volt batteries for the belt-bomb that killed Rajiv Gandhi in 1991, and sentenced to life in jail.

In his application, Perarivalan has said that he is languishing in jail for the past 26 years.

The move comes on Wednesday after the Central Bureau of Investigation (CBI) said the apex court that it could not properly investigate the bomb that killed the former prime minister because it "got no help from Sri Lanka" in establishing the origin of the conspiracy.

A bench comprising Justices Ranjan Gogoi and R Banumathi asked the CBI to file its response to the application filed by convict AG Perarivalan within three weeks and posted the matter for hearing on February 21.

In its May 1999 order, the Supreme Court had upheld the death sentence of four convicts-- Perarivalan, Murugan, Santham and Nalini in the assassination case.

However, in April 2000, the Tamil Nadu governor commuted the death sentence of Nalini on the basis of state government's recommendation and an appeal by former Congress president Sonia Gandhi.

Later the top court had on February 18, 2014 commuted the death sentence of Perarivalan to life imprisonment, along with two other condemned prisoners -- Santhan and Murugan -- on grounds of a delay of 11 years in deciding their mercy pleas by the Centre.

During the hearing on Wednesday, advocate Gopal Shankaranarayanan, representing Perarivalan told the court that he has filed an application seeking recall of the 1999 judgement by the top court and the CBI should respond to it.

In 2017, Perarivalan had asked for a reprieve saying that the CBI dropped the part in his confession where he said he had "absolutely no idea" what the batteries were for.

The CBI told SC that the conspiracy behind the bomb that killed former Prime Minister Rajiv Gandhi could not be investigated as "Sri Lankan authorities were not cooperating".

Perarivalan was 19 when he was arrested weeks after the assassination. He spent 14 years in solitary confinement after being sentenced to death. That was changed to life term by the Supreme Court in 2014.

A multi-agency probe was set up in 1998 on the recommendation of the Jain Commission which investigated the conspiracy.

On Tuesday, the Supreme Court had asked the Centre to take a decision within three months on a 2016 letter by Tamil Nadu government seeking its concurrence on releasing seven convicts in the assassination case.

The letter written on March 2, 2016, had said that while the state government has already decided to release the seven convicts, it is necessary to seek the Centre's concurrence as per an apex court order of 2015.

Rajiv Gandhi was assassinated on the night of May 21, 1991 at Sriperumbudur in Tamil Nadu by a woman suicide bomber of the separatist Lankan Tamil outfit LTTE, identified as Dhanu, at an election rally.

Dhanu greeted him at a rally in Sriperumbudur town with a bomb strapped to her chest. Fourteen others, including Dhanu herself, were also killed.