The scheme, which aims at providing 50 percent subsidy to all the working women to buy two-wheelers, was a pet project of Jayalalithaa. 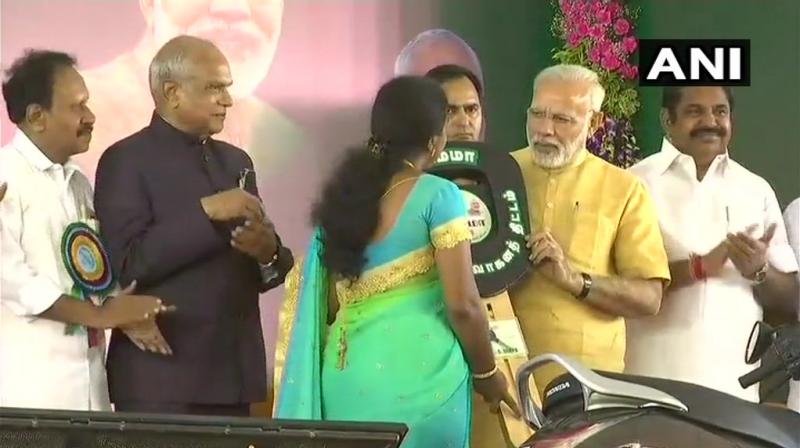 The scheme, which aims at providing 50 percent subsidy to all the working women to buy two-wheelers, was a pet project of Jayalalithaa.

Addressing the event, Modi said he was glad to be able to launch one of the dream projects of late chief minister J Jayalalithaa.

Speaking on the importance of empowering women in family, PM said it would ultimately lead to the development of an entire house-hold.

"When we help with a woman's education, we ensure that the family is educated," he said.

"When we facilitate her good health, we help keep the family healthy. When we secure her future, we secure future of the entire home," he further added.

The Prime Minister who is on a two-day visit to the state, was received by Governor Banwarilal Purohit, Tamil Nadu Chief Minister E Palanisamy, Dy CM O Panneerselvam and others at the Chennai airport.

Commemorating the 70th birth anniversary of Jayalalithaa, Modi planted saplings near the entrance of Kalaivanar Arangam auditorium in Chennai along with the CM and Deputy CM.

Addressing the audience at Amma Two-wheeler scheme launch, Panneerselvam said the govt of Tamil Nadu continues to be inspired by the principles of Amma.

"This Amma two wheeler scheme is proposed election manifesto by our Amma. PM Had close relationships with her," he said.

Remembering Jayalalithaa, Chief Minister Palanisamy said it was her who took Tamil Nadu on the path of development.

The CM also requested PM Modi to take appropriate action for the constitution of the Cauvery Management Board and for implementing Cauvery regulation committee as per the guidance of the Supreme Court.