About 100 companies of Central Forces are being inducted into the State at the moment. 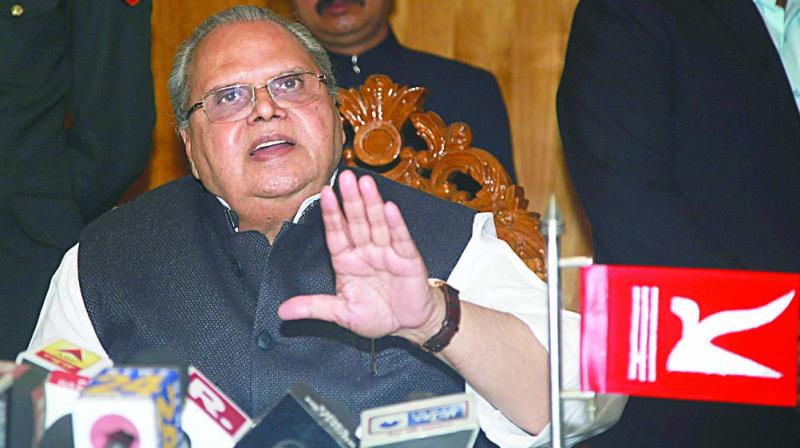 The Governor appealed to the people that the induction of forces should be seen only in the context of conducting elections and should not be attributed to any other cause. (Photo: PTI)

Jammu: Jammu and Kashmir Governor Satya Pal Malik called an informal meeting of State Administrative Council to review the current situation in the state particularly in the backdrop of Pulwama terror attack and in the wake of upcoming Lok Sabha elections.

In the informal meeting of the State Administrative Council, the Governor was apprised of the security scenario in Kashmir valley and Jammu and also briefed about the gradual induction of central forces for election purposes.

About 100 companies of Central Forces are being inducted into the State at the moment, however, this is still less than the actual additional forces required and thus more forces would be inducted in the coming weeks.

The Governor appealed to the people that the induction of forces should be seen only in the context of conducting elections and should not be attributed to any other cause.

He appealed to the people not to believe in rumors of any extreme nature which are circulating widely in some quarters and to remain calm.

"These rumors are unnecessarily creating an atmosphere of fear in the minds of people, leading to stress and disruption to normal life. Rumors about curfews and other actions should not be believed," said a statement from Governor Satya Pal Malik.

"There is some security related action being taken by the forces, but this is purely related to the Pulwama attack which is an unprecedented one. The response of security forces is guided solely by the need to counter both the impact and any further action that may be taken by terrorist groups who are still out to disrupt our country and its democratic processes," it read.

On the issue of safety and security of Kashmiris residing outside the state, the Governor clarified that there is no panic anywhere and students are safe.

"Over 22,000 Kashmiri students are studying outside the state and the number of students who have actually been injured or hurt in incidents is not even in single digits. The state’s system of Liaison Officers in nine major cities has worked effectively so that there is no panic anywhere and students continue their studies safely. The work of Los, helplines in State and other measures have ensured that the vast majority of students continue their studies uninterrupted," said the Governor.

The Raj Bhavan informed that there is no stock of LPG, a result of earlier blockage of National Highway for 7 days and ongoing blockage for the past 4 days, leading to disruption of supplies from Jammu to Srinagar. The government is taking measures to enhance the supplies to the Kashmir region.

"Divisional Commissioner, Kashmir rationed petrol and diesel supply to conserve whatever is available for emergency purposes. Steps are being taken to increase the availability of stocks in the valley. The public should see it only as an administrative measure in a shortage situation," informed Raj Bhavan.