India   All India  24 Feb 2019  Those who provoke youth of valley, send their children abroad: Amit Shah
India, All India

Those who provoke youth of valley, send their children abroad: Amit Shah

Targeting Congress, NC and PDP, Shah said all the three parties are 'Parivarwadi' parties who care only for their families. 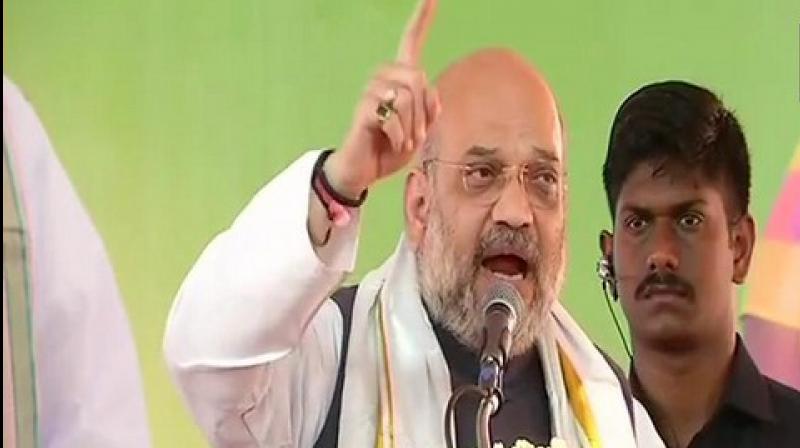 Amit Shah also said that there is zero tolerance on terrorism and Pulwama terror attack would be avenged. (Photo: ANI)

Jammu: BJP President Amit Shah said that the leaders, who provoke separatist tendency among the youth of Jammu and Kashmir, send their children abroad for studies while they make schools in the valley to shut down.

"The youth of the valley should ask these leaders where their children study. They all study in London and America at the cost of the public money of Jammu and Kashmir. They talk of separatism, provoke the youth of valley, provoke separatist tendency. Those who close schools here send their children abroad for studies," said Amit Shah while addressing a public rally in Jammu.

Targeting Congress, National Conference and PDP, Shah said all the three parties are "Parivarwadi" parties who care only for their families.

He also said that there is zero tolerance on terrorism and Pulwama terror attack would be avenged.

"The blood of the soldiers killed in Pulwama would not go waste," said Shah.

"The unprecedented development which Jammu and Kashmir has witnessed in the Narendra Modi government would not have taken place had the "parivarwadi" parties like NC-PDP would have ruled the state," he said.

He also slammed NC chief Farooq Abdullah saying that he has no moral right to take the account of work from the BJP government.

"Farooq Abdullah was asking our account. I want to say that we are people who stay here and don't go to London for vacations," said Amit Shah.

He also targeted Congress President Rahul Gandhi for allegedly raising questions on the centre for the Kashmir situation.

"Rahul Gandhi raises questions on the situation of Kashmir. I want to tell him that if questions are being raised about Kashmir today, it is because of your great-grandfather Jawaharlal Nehru. When our forces were going to conquer PoK, who stopped them? It was Jawaharlal Nehru," said Shah.