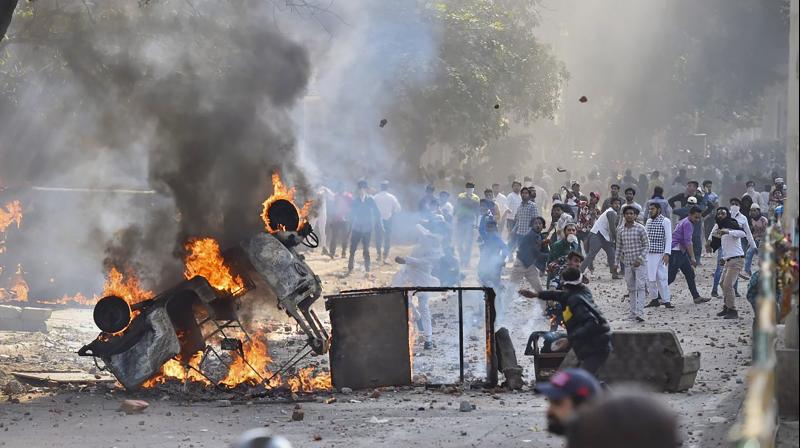 Vehicles set ablaze as protestors throw brickbats during clashes between a group of anti-CAA protestors and supporters of the new citizenship act at Jafrabad in north-east Delhi on February 24, 2020. (PTI)

New Delhi: The Delhi Police said that a head constable was killed during clashes over the Citizenship Amendment Act (CAA) in northeast Delhi today.

Tension escalated in northeast Delhi with protesters torching at least two houses and a fire tender in the Jaffrabad and Maujpur areas, where pro and anti-CAA groups clashed for the second consecutive day on Monday and hurled stones at each other.

Violence was also reported from the Chandbagh area in Jaffrabad.

According to officials, a fire tender was damaged by the protesters after it responded to a fire call in the area.

The Delhi Metro closed entry and exit at the Jaffrabad and Maujpur-Babarpur stations as an uneasy calm prevailed in the area.

"Entry & exit of Jaffrabad and Maujpur-Babarpur are closed. Trains will not be halting at these stations," the Delhi Metro Rail Corporation (DMRC) said in a tweet.

Entry and exit were closed at the Jaffrabad metro station for over 24 hours.

Clashes broke out on Sunday evening between pro and anti-CAA groups near Jaffrabad after a large number of people protesting against the Citizenship (Amendment) Act (CAA) blocked a road, while similar sit-ins were launched in several other parts of the national capital.

Nobody should be allowed to orchestrate violence, he said.