The BSP too has given indications that it remains positive about the new-found understanding between the two parties. 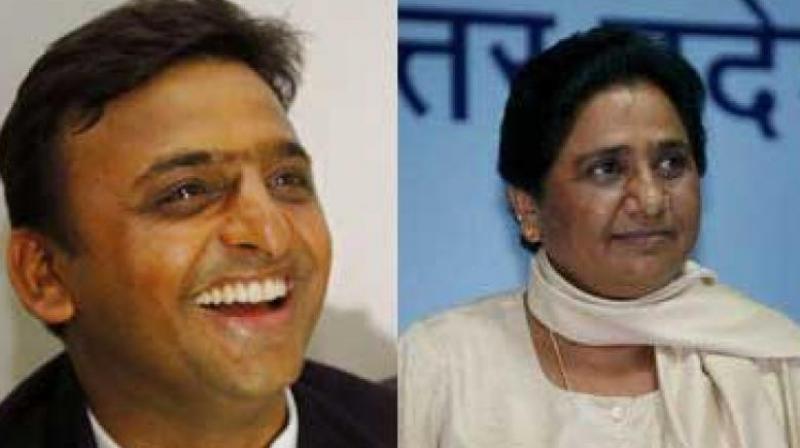 The Samajwadi Party had planned a function at the party headquarters in Lucknow to celebrate the victory of its candidate Jaya Bachchan. (Photo: PTI/File)

Lucknow: Sending a signal of solidarity to the BSP whose lone candidate backed by it lost in the Rajya Sabha polls, the Samajwadi Party (SP) cancelled the victory celebration for its nominee Jaya Bachchan to be held in Lucknow on Saturday.

The BSP too has given indications that it remains positive about the new-found understanding between the two parties, with its national general secretary Satish Misra asserting that they got the SP votes and it was only “misuse” of power by the BJP which led to the defeat of his party’s candidate He, however, said that any decision on alliance with the SP in future polls will be taken by BSP chief Mayawati

The Samajwadi Party had planned a function at the party headquarters in Lucknow to celebrate the victory of its candidate Jaya Bachchan, but since the other candidate, Bhimrao Ambedkar (BSP) lost, party president Akhiliesh Yadav has cancelled it, party spokesman Sunil Singh Sajan said.

Senior leaders including Akhilesh Yadav and others were scheduled to attend the programme but “there appears to be no relevance of it now” after the other candidate supported by the party failed to make it through, Sajan said.

He alleged that Ambedkar could have easily won the election but the ruling party had misused power to bag the seat.

Similar views were also expressed by BSP leader Misra, who charged the ruling party with misusing money and muscle power for winning the ninth seat.

After winning two Lok Sabha by-elections on prestigious Gorakhpur and Phulpur seats with the backing of BSP, Samajwadi Party had made it clear that it will work towards ensuring the victory of Ambedkar, ostensibly to further consolidate the new found understanding with BSP chief Mayawati, and had directed loyal MLAs to vote for the BSP nominee. However, the BSP lost out in a cliffhanger yesterday.

Misra claimed that the votes of the SP, BSP and Congress remained intact in the election.

“BSP candidate Bhimrao Ambedkar got all the votes as well as one vote extra,” Misra told reporters late last night after the completion of the Rajya Sabha election process.

The BSP leader, however, did not comment on whether the alliance with SP will continue stressing that it was a policy decision which will be taken only by party president Mayawati.

After the party’s impressive show, chief minister Yogi Adityanath had claimed that the election had exposed the “opportunistic face of SP”. “It can take votes but not give votes in return”, he said referring to SP’s victory in the recent Lok Sabha bypolls in Gorakhpur and Phulpur.

Blaming the BJP for Ambedkar’s loss, Misra said that two MLAs lodged in different jails including Mukhtar Ansari were not allowed to come for voting.

“They (BJP) knew well that they were going to lose and so misused power to clinch it,” Misra said.

“Elsewhere in the country, all MLAs in jail were allowed to vote but here, despite all necessary steps taken by us, Mukhtar Ansari (BSP) and Hari Om Yadav (SP) were not allowed to come for voting as they knew that they did not have the numbers,” the BSP leader said.

Earlier too Mukhtar had taken part in all elections including the President’s poll despite being in jail, he said.

The BSP leader also alleged that two MLAs of other parties who wanted to vote for his party nominee were abducted and there were several anomalies in the counting.

In the keenly watched RS election, the BJP ensured victory of all its nine candidates. The tenth seat went to Samajwadi Party’s Jaya Bachchan.