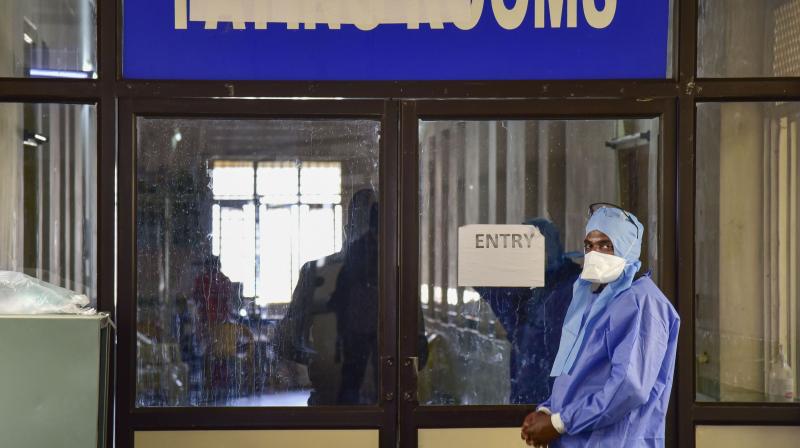 A medic stands at the isolation ward of Gandhi Hospital in Hyderabad. (PTI)

Hyderabad: Two deaths at diferent hospitals in Hyderbad Monday night have raised concerns of a possible link to the Covid-19 virus. Both patients has no recent foreign travel history, and so were not tested for the coronavirus in Hyderabad.

A 30-year-old woman died of pneumonia of unknown origin at Apollo hospital on Monday night.

This patient had no travel history and no contact with any travellers from Covid-19 affected countries. Due to this reason her samples were not collected at Gandhi Hospital when she went there with symptoms of cough and cold.

She developed severe breathlessness and had a continuous cough on Monday afternoon and was admitted in Apollo Hospitals. Doctors in the emergency ward insisted she be transferred to Gandhi Hospital but her family members were not sure due to their earlier experience.
Stabilisation was difficult as the patient's respiratory distress exposed healthcare workers. Only two doctors and one nurse could attend to the patient. Lung failure was observed by late evening and the patient passed away at night.

The second death was of a 60-year-old with history of domestic travel to Kolkata. Upon return, the person suffered from severe cough, cold and fever, and was taken to Gandhi Hospital. But samples were not taken there as there was record of contact with a person who had been to a coronavirus-affected country.

On Monday the patient developed severe respiratory distress and was rushed to hospital where an X ray was taken. The patient died due to suffocation at hospital.

Telangana health officials have been alerted to the two cases and are engaged in contact tracing of both cases.

A student, Anirudh Kokala, whose family has rented out their place to one of the two bereaved families, has appealed to health officials to carry out contact tracing and testing all of them.