Ghaziabad Police arrested Kumar with the help of Udipi Police on Tuesday night. 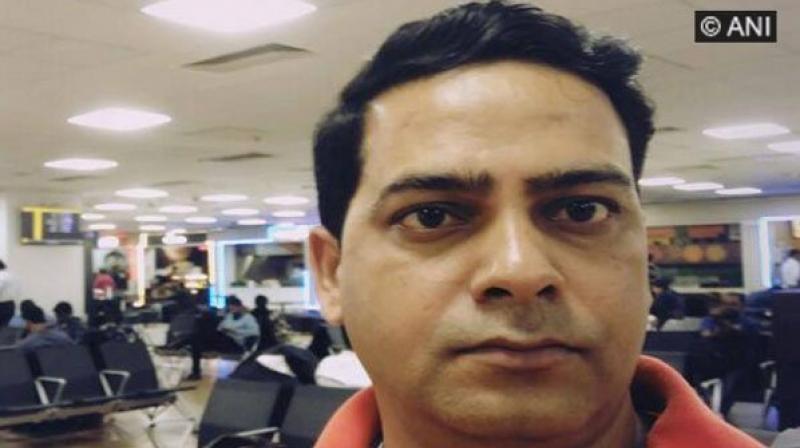 Kumar was a drug addict and often purchased drugs for his personal use. (Photo: ANI)

Ghaziabad Police arrested Kumar with the help of Udipi Police on Tuesday night.

Three teams were deputed to nab him.

On the intervening night of Saturday and Sunday, Kumar allegedly served sedative-laced drinks to his wife Anshu Bala (32), son Prathimesh (5), daughter Akriti and son Arav (twins aged 4 years) and then slit their throats, police had said.

The bodies were found 22 hours after the incident on Sunday, following a video posted by Kumar on his family WhatsApp group in which he admitted to the killings.

Kumar had said in the video that he will commit suicide and had purchased poison.

After being alerted, police recovered the bodies from Kumar's flat and sent them for post-mortem.

Police will produce Kumar before the media later in the day, SP (city) Shlok Kumar said.

It was initially suspected that Kumar had purchased potassium cyanide from a medical store in Gyan Khand.

However, medical store owner Mukesh, who was arrested on Monday, denied that he had sold potassium cyanide to Kumar.

Mukesh claimed that he charged Kumar for cyanide but gave him some other sedative.

A thorough search was launched by the drugs department at the medical store but cyanide was not found.

Kumar was a drug addict and often purchased drugs for his personal use.

Due to this addiction he faced financial crisis and lost his job, police had said.

Kumar, a native of Jamshedpur in Jharkhand, married Anshu Bala in 2011. He lost his job in December last year.