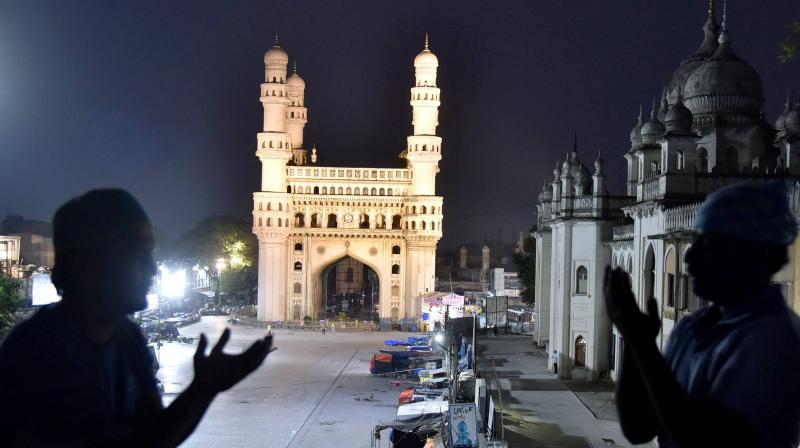 Two men pray with Hyderabad's iconic monument Charminar in the background on Friday night, April 24, 2020 even as the Union Home Minister sounded an alarm on the coronavirus situation in the city. (PTI)

New Delhi: Anxieties shot up in India late this evening with the central government saying that the COVID-19 situation is “especially serious” in several cities like Hyderabad, Chennai, Ahmedabad, Surat and Thane.

This assessment by the Ministry of Home Affairs (MHA) came in a statement it released after Ahmedabad municipal commissioner Vijay Nehra had raised the red flag, saying the number of COVID-19 patients in the Gujarat capital may grow to 8 lakh by the end of May if the current four-day period of doubling of cases continues.

So far, Ahmedabad has reported 1,638 cases, the highest in Gujarat which accounted for over 2,600 infections.

Coronavirus cases were inching towards 7,000 in Maharashtra, which tops the tally, followed by Gujarat. Tamil Nadu (1,755) was in sixth position while Telangana accounted for 970 cases.

These teams are in addition to six IMCTs already constituted earlier, she said.

The teams have been constituted for a spot assessment of COVID-19 hotspot districts.

The six teams are in Mumbai, Pune (Maharashtra), Indore (Madhya Pradesh), Jaipur (Rajasthan) and West Bengal (one team for Kolkata and adjoining districts and the other for North Bengal). The team in Mumbai will also visit Thane.

The Home Ministry statement made a pointed mention that a number of violations of lockdown measures have been reported, ranging from “violence on frontline healthcare professionals, attacks on police personnel, violation of social distancing norms in market places and opposition to setting up of quarantine centres and so on," it said.

The ministry said if such incidents are allowed to occur, it would pose a serious health hazard for the people of the country.

What are IMCTs going to do?

The IMCTs have public health specialists and officers from the National Disaster Management Authority (NDMA), whose expertise is made available to the state governments to manage the pandemic.

These teams would make an on-the-spot assessment of the situation and issue necessary directions to state authorities for redressal and submit reports to the central government, MHA said.

They will examine a range of issues including compliance with lockdown measures as per guidelines issued under the Disaster Management Act 2005, supply of essential commodities, social distancing of people outside their homes, preparedness of health infrastructure, hospital facilities and sample statistics in the district.

The six teams which were earlier sent have shared their findings with the state governments, secretary Srivastava said.

She said IMCT Mumbai suggested to install portable toilets in the Dharavi slum in Mumbai to augment the number of community toilets as people are dependent on such toilets and have to come out in spite of the lockdown ban.