The district, which had as many as 19 cases at its peak,has only two active cases now 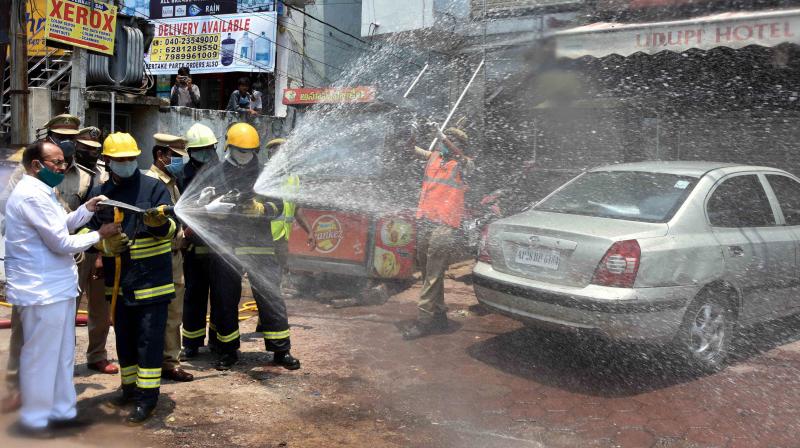 Karimangar had hit headlines after it came to light that the Indonesian preachers visited various places in the district after attending the Tablighi Jamat event in Delhi. PTI

Karimnagar: Karimnagar district, which hit the headlines after the visit of 10 Indonesian preachers who tested positive for COVID-19, is on the road to recovery with lifting of restrictons of six of the seven containment zones, due to the administration's tireless efforts, Collector K Shashanka said.

"The district, which had as many as 19 cases at its peak,has only two active cases now and if those two recover and are discharged, the whole district will come under the green zone in case no new case is reported henceforth," he said.

The last case was reported on April 15, Shashanka said. Karimangar had hit headlines after it came to light that the Indonesian preachers visited various places in the district after attending the Tablighi Jamat event in Delhi
earlier in March.

A case was slapped against them and also some locals who harboured them for alleged negligence and disobedience to the order issued by a public servant.

"Time will decide whether we have succeeded in reducing the cases or not .What we can say is that we had very good support form the state government.
The second thing is that it is a team effort in Karimnagar. The community also came forward and complied.

We have been implementing the States instructions and Government of India's guidelines from time to time. We have tried to involve the community in a big way," the Collector told PTI.

According to him, the first case was reported on March 17 which prompted the authorities to track the contacts and identify the foreigners, who were later sent to the state-run Gandhi Hospital after they tested positive. The district administration,along with local police using latest surveillance technologies strictly implemented the lockdown announced by both the state government and the centre.

"We have used drones to check peoples movement in contaminant zones.
We intensified our efforts to ensure that the lockdown is implemented in letter and spirit, Karimnagar police commissioner VB Kamalasan Reddy said.

According to an official communication from the district, as many as 790 people are in home quarantine and only seven are in government quarantine centres as on Friday.

We had seven containment zones in the district. Right now we have only one containment zone. As per the latest state instructions if there is a single
case and 14 days have passed, then we can release the containment zone, if no new case is reported, the collector said.