India   All India  24 Apr 2021  Justice Ramana sworn in as the 48th Chief Justice of India
India, All India

Justice Ramana sworn in as the 48th Chief Justice of India 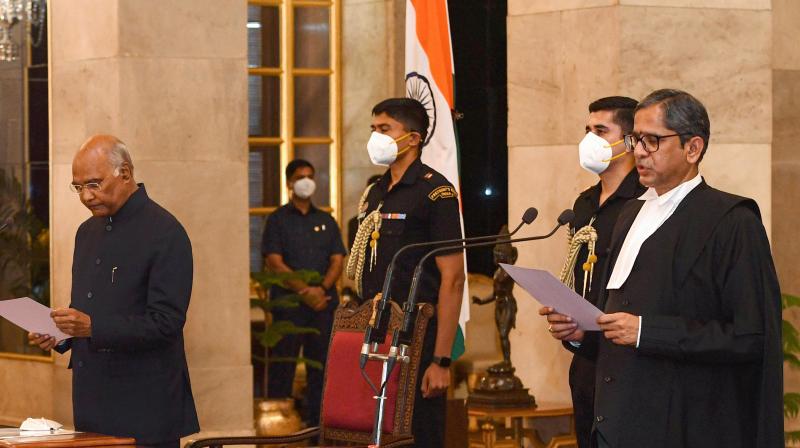 President Ram Nath Kovind administers the oath of office to Justice Nuthalapati Venkata Ramana, after he was appointed as the 48th Chief Justice of India (CJI) at Rashtrapati Bhavan, in New Delhi, Saturday, April 24, 2021. (PTI)

New Delhi: Justice Nuthalapati Venkata Ramana was on Saturday sworn as the 48th Chief Justice of India. He was administered the oath of office by President Ram Nath Kovind. He will hold the post for about 16 months, until August 26, 2022.

Justice Ramana was elevated as a judge of the top court on February 17, 2014. Born in an agricultural family on August 27, 1957, in Ponnavaram village, Krishna district, Justice Ramana did his BSc, BL and was enrolled as an advocate on February 10, 1983.

He began his career as a journalist of a leading Telugu newspaper for a short while before turning to legal practice in 1983. During his student days, he was known as an activist, involved in issues concerning farmers and industrial workers.

He was appointed Chief Justice of Delhi high court on September 2, 2013.

During his tenure in the Supreme Court, Justice Ramana has been a part of many significant rulings, including those on setting up of special courts for fast-tracking criminal cases against MPs and MLAs; bringing the CJI’s office amenable to the Right to Information Act; and, lifting Internet restrictions in Jammu & Kashmir.

He has advocated the need to implement regional languages as the language of the court to increase participation of rural litigants in the trial process.