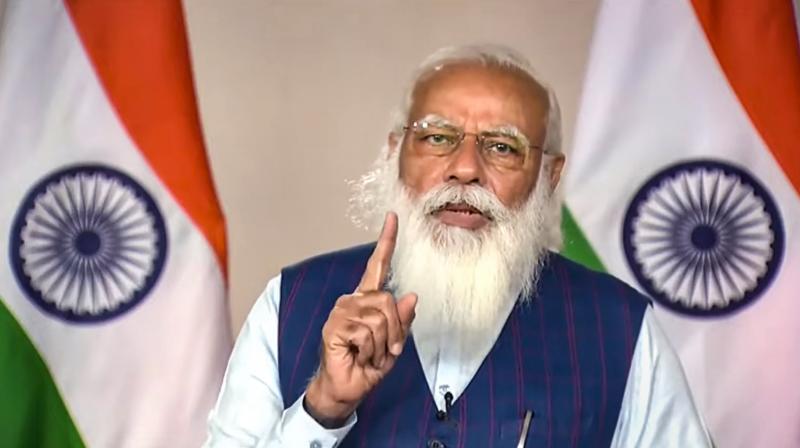 Modi said the Centre has provided more than 15 crore doses of essential medicines to the States free of cost and safety of hospitals should not be neglected. — PTI

New Delhi: As a severe crisis for medical Oxygen builds up, Prime Minister Narendra Modi urged States and Union Territories to be strict with hoarding and black marketing of essential medicines, injections and Oxygen. During a meeting with the Chief Ministers of 11 States and Union Territories which have reported the maximum number of cases, PM, on Friday, said that the central government is working on all possible options to reduce the travel time and turnaround time of Oxygen tankers. For this, Railways has started Oxygen Express and empty Oxygen tankers are also being transported by the Indian Air Force to reduce one way travel time.

He added that the Centre has provided more than 15 crore doses of essential medicines to the States free of cost and safety of hospitals should not be neglected. He further said awareness must be increased to alleviate panic purchasing of medicines.

Interestingly, some part of the meeting was televised at Delhi Chief Minister Mr Arvind Kejriwal’s end, which the PM did not appreciate. Terming the conduct “inappropriate,” PM said this is the first time a CM has broken the protocol and showed live a meeting. Mr Kejriwal apologised to the PM for this but his office issued a statement, saying “the CM address was shared live because there has never been any instruction, written or verbal, from the Central government that the said interaction could not be shared live.”

“There have been multiple occasions of similar interactions where matters of public importance which had no confidential information were shared live. However, if any inconvenience was caused we highly regret that” the Delhi CMO said even as the Central government accused Mr Kejriwal for playing politics over Oxygen.

During his interaction Mr Kejriwal raised alarm that a "big tragedy" may happen due to Oxygen shortage in hospitals and Centre should take over all Oxygen plants through the Army. He requested the PM to direct Chief Ministers of all States to ensure smooth movement of Oxygen tankers coming to Delhi.  The Chief Minister also objected to different rates being charged from state governments and the Centre for the COVID-19 vaccine, and said "one nation, one rate" policy should be followed.

Meanwhile, noting that the virus is affecting several states as well as Tier 2 and Tier 3 cities at once, PM  assured Centre’s full support to all the states and in this fight. He added that the Ministry of Health is also in touch is monitoring the situation closely and issuing necessary advice to the states from time to time.

On Oxygen supply, PM Modi took note of the points raised by the States. He said there is a continuous effort to increase Oxygen supply. The PM said that every state should ensure that no Oxygen tanker, whether it is meant for any State, is stopped or gets stranded. The Prime Minister urged the States to set up a high-level co-ordination committee to carry Oxygen to different hospitals of the State. This Coordination Committee should ensure that as soon as there is allotment of oxygen from the centre, it can deliver Oxygen as per requirement in different hospitals of the state immediately.

The PM said that along with upgrading of resources focus has to be on testing and it should be seen that the vaccination programme is not impacted.

Expressing grief on recent incidents of Oxygen leakage and fire at hospitals, PM Modi said the administrative staff of the hospital needs to be made more aware about the safety protocols. PM Modi also urged the administration to continuously make people aware so that they do not indulge in panic buying. He said that with united efforts, we will be able to stop this second wave of the pandemic across the country.

Mr Modi also held a meeting with leading Oxygen manufacturers across the country via video conferencing and asked them to provide solutions in a very short time. PM Modi stressed on the need to maintain good co-ordination between the government and the Oxygen producers. PM noted that there is a need to increase the availability of Oxygen cylinders as well as upgrade the logistics facilities for transportation of oxygen. He urged the industry to utilize tankers meant to transport other gases for Oxygen supply.