The partymen later submitted a memorandum to CMO seeking an immediate rollback of fuel price hike stating that it was affecting common man. 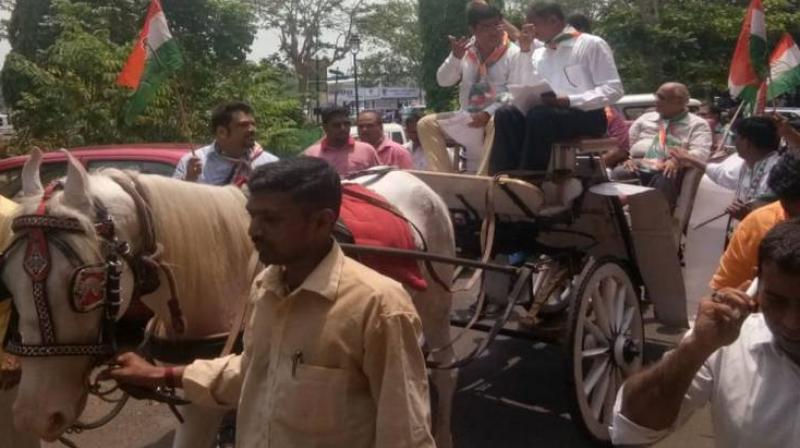 Panaji: As a mark of protest against the fuel price rise, members of the opposition Congress today travelled in a horse-drawn carriage in Goa's capital Panaji. During the protest, which lasted for about an hour, the Congress members went around the district collectorate in the horse carriage.

"As a mark of protest against the fuel price rise, we decided to travel in a horse carriage," Kavlekar said.

The partymen later submitted a memorandum to the Chief Minister's Office (CMO) seeking an immediate rollback of fuel price hike stating that it was affecting the common man.

"We hereby protest vehemently the continued spiralling of fuel prices, which has been adversely affecting the economy as a whole and the life of the common citizens in general," Chodankar said in the memorandum.

"We condemn the callous response, rather absence of any considered response of local or central government, to this uncalled for price rise and its life-threatening impact on the common man," it said.

The decision to increase the fuel prices has inconvenienced the common man of the country and shown that the government policies are anti-people and insensitive,  Chodankar alleged.

The Congress leader recalled that Chief Minister Manohar Parrikar had earlier promised that the petrol prices in Goa would not be allowed to go beyond Rs 60 per litre.

"It has thus exposed that Parrikar's statements were hollow and only made to cheat the people of Goa," he said.

"We, therefore, demand immediate roll back of fuel prices so as to bring much needed respite to the people," Chodankar said.

"We also demand introduction of GST-based taxation for fuel, failing which we shall agitate more vigorously in the interest of the common man," he added.