During the last phase, Amit Shah's road-show and the chants of “Jai Shri Ram” created a major Hindutva wave in the West Bengal. 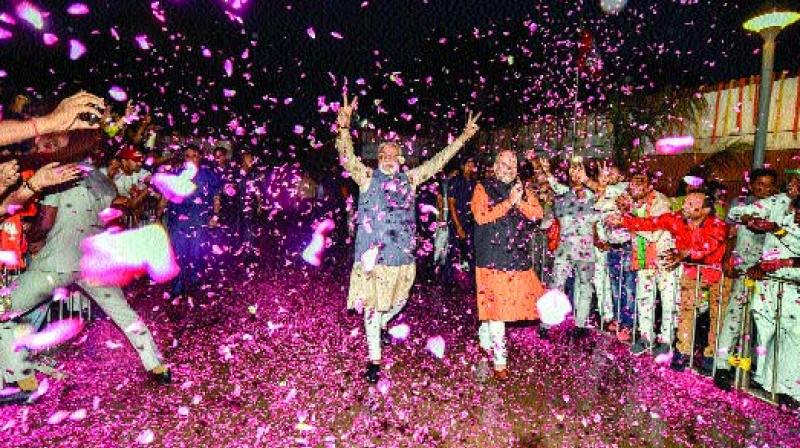 New Delhi: If the country voted for an “aspirational India” in 2014, then 2019 has witnessed a shift towards aggressive Hindutva and muscular nationalism. The verdict clearly indicated that voters across the country have embraced the BJP’s brand of majority nationalism, rejecting the Congress' pluralism and secularism.

That the electorates chose Hindutva over economic issues became evident with BJP’s terror accused candidate Pragya Thakur trouncing Congress heavyweight Digvijay Singh in Bhopal by nearly three lakh votes. Besides claiming that the decorated police officer Hemant Karkare died during the 26/11 attacks because of her “curse”, she went said she regarded the assassin of Mahatma Gandhi, Nathuram Godse, a “patriot”.

Sensing that the party could get into a sticky wicket over economic issues, including the spiralling unemployment and agrarian crisis, the Modi-led BJP built its poll narrative around surgical strikes, the Pulwama attack, and anti-minority-ism.

While Prime Minister Narendra Modi branded terrorism with religion by saying “no Hindu can be a terrorist”, BJP president Amit Shah in Bengal referred to illegal migrants from Bangladesh as “termites”. In rally after rally, Mr Modi and Mr Shah's major thrust was on the line “Hindu khatre mein hain (Hindus are in danger).”  They did not say it in so many words, but the signal was clear.

In West Bengal, where BJP increased its tally from two seats to nearly 18, the party played the polarisation card to the hilt and virtually forced the Trinamool Congress chief Mamata Banerjee to toe the line. Bengal, which was known as the last bastion where Durga Puja, Christmas, and Eid were celebrated with equal fervour, began moving towards anti-minority-ism. In the last few months, BJP and it's fringe elements started celebrating Ram Navami. This was the first time that West Bengal witnessed sword-wielding rallies during Ram Navami.

During the last phase, Amit Shah's road-show and the chants of “Jai Shri Ram” created a major Hindutva wave in the state. In an interview, a BJP leader from Bengal said, “Ram has now become a symbol of Hindutva, at least in Bengal. The people in Bengal are now afraid that our state will become Bangladesh. Hindus in West Bengal are going through an existential crisis and are looking for a Hindutva-based society where they can feel safe.”

Despite various attempts, there were no takers for Congress and its president Rahul Gandhi’s narrative on Rafale and economic issues. The nation rejected his slogan of “Chowkidar chor hain”. Instead, India decided to vote for the chowkidar, who it thinks is the ultimate saviour and protector of India's internal security. Finally, Mr Modi sitting inside a cave in a saffron robe during his trip to Kedarnath before the seventh and the last phase of polls went on to show that this leader was openly wearing his religion on his sleeve. This narrative created a tornado which wiped out Congress and the much-hyped “mahagathbandhan”.