Rahul won from Wayanad, Kerala, with a record lead of 431,770 votes over his nearest rival, CPI’s P.P. Suneer. 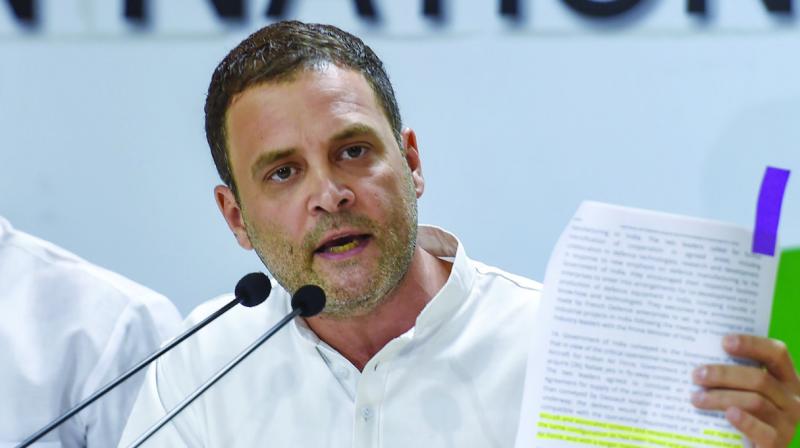 New Delhi: The Congress Party’s valiant efforts to challenge the Bharatiya Janata Party in 2019 Lok Sabha elections were stymised in the stunning second Modi wave with party president Rahul Gandhi failing to even retain his family pocket borough of Amethi where he was dealt a humiliating defeat by Union minister Smriti Irani. He lost by a margin of 38,000 votes.

At the time of going to press, the Congress had managed to get only 50 Lok Sabha seats, an increase of mere eight seats from its 2014 tally of 44.

To say that the results were unexpected is to state the obvious. In the lead-up to the Lok Sabha elections, the Grand Old Party seemed to be on the path of revival after it won three crucial Hindi heartland states of Madhya Pradesh, Rajasthan and Chattisgarh, besides giving a spirited fight in Modi bastion of Gujarat.

But the gains of the Asse-mbly polls seem to have been lost all too soon.

In these four states the party failed to barely open its account on Thursday. While in Madhya Pradesh, it won only one seat (Chindwara), in Chattisgarh it was leading in two seats and in Rajasthan and Gujarat not even one.

The party failed to win any seat in Delhi and Haryana as well.

Addressing a press conference on Thursday, Mr Gandhi refrained from going into the details of the party’s defeat and instead chose to congratulate Prime Minister Narendra Modi and the BJP for the victory, saying that he respected the people’s mandate.

“I also want to congratulate Smriti Irani. She should now nurture the constituency with love,” Mr Gandhi said when asked about his defeat in Amethi.

He won from Wayanad, Kerala, with a record lead of 431,770 votes over his nearest rival, CPI’s P.P. Suneer.

When asked about whether he would take responsibility for his party’s dismal record overall, the Congress president gave a cryptic reply, saying that this was between him and the Congress Working Committee (CWC).

Though speculation was rife that Mr Gandhi offered his resignation to his mother and former Congress president Sonia Gandhi, Congress sources rubbished it as baseless rumour.

This was the first general election that the Congress fought under Mr Gandhi’s presidentiship during which the Congress president had himself launched a frontal attack on the Prime Minister, coining the term, “Chowkidar chor hai” in the context of the Rafale jet deal.

Many analysts now say that the attack on the BJP should have been on the government’s policies rather than on the “personality cult” of the Prime Minister and that this backfired.

Among the other problems, they say, was the late launch of the Congress’ campaign that centred around Nyay — the Minimum Income Guarantee scheme promised by the party in its manifesto.

The much-touted outreach to farmers also did not pull them towards the Grand Old Party. The campaign over alleged corruption in Rafale deal, which was supposed to be the backbone of the Congress’ campaign, also failed to click as did the proverbial Brahmastra of launching Priyanka Gandhi into politics. Her decision of not challenging Mr Modi in his constituency, Varanasi, also spiralled the downward spirits of the fledgling party campaign from the third phase onwards.

Also much debatable was the party’s decision of not forming alliances in Delhi and Haryana with the Aam Aadmi Party. Both the Congress and the AAP failed to open their accounts in these two states.

Ultimately, it would not be wrong to say that the Congress failed to made a dent in the personality cult that’s been spun around Mr Modi.

Rahul Gandhi’s innings in politics in all three avatars — as party general secretary, vice-president and now president — have been tumultuous. The CWC meeting, expected to be held soon, will take a call on his alleged offer to resign. In the days to come, Mr Gandhi will have to fight a dual battle — one of tackling the BJP and the other of establishing his leadership over his party.