India   All India  24 May 2019  ‘Son of soil’ Amit Shah wins with big margin from Gandhinagar
India, All India

BJP president Amit Shah, the main architect of the party’s spectacular performance, has won from Gandhinagar with a record margin of 5.74 lakh votes. 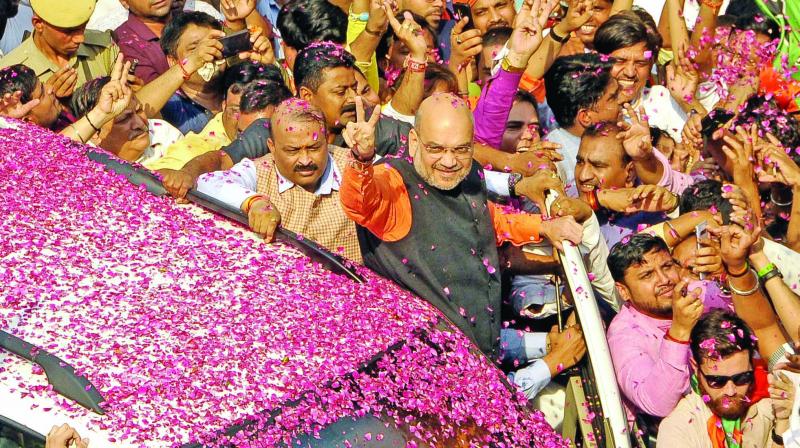 BJP president Amit Shah waves to supporters upon his arrival at the party headquarters to celebrate the party’s victory in New Delhi. (Photo: Pritam Bandyopadhyay)

Ahmedabad: BJP president Amit Shah, the main architect of the party’s spectacular performance, has won from Gandhinagar constituency with a record margin of 5.74 lakh votes for the seat. The BJP has also won all 26 Lok Sabha seats in Gujarat, repeating its performance of 2014. Mr Shah defeated his nearest rival and the Congress candidate and Gandhinagar MLA C..J. Chawada, breaking the record of 4.83 lakh votes set by party veteran L.K. Advani.

The BJP’s C.R. Patil has won the Navsari seat in south Gujarat with a margin of 6.86 lakh votes, the highest winning margin in the state.

The result of the Lok Sabha election in the state indicates that the people of Gujarat have voted for a son of the soil, Prime Minister Narendra Modi.

“This is a clear victory of Modiji and Amit Shah ji. People have rejected lies of the Congress and maintained their faith in Modi ji as they feel that only Modiji can lead the country,” chief minister Vijay Rupani told mediapersons after the results were declared.

In a stunning performance by the BJP in Modi-Shah’s fortress, many big shots of the Congress had to face defeat. While Leader of the Opposition in the Assembly Paresh Dhanani lost to BJP candidate Naran Kachhadia in Amreli, two former ministers in the UPA government, Bharatsinh Solanki and Tushar Chaudhary, lost from Anand and Bardoli.

The Congress hoped to get at least four seats — Amreli, Anand, Junagadh and Patan — and on another four seats it was expecting a close fight. But the BJP secured a comfortable victory in all 26 constituencies.

“It is a clear mandate for Prime Minister Narendra Modi. People of Gujarat found no reason not to vote for him. It would have been a dent if the BJP had lost even a single seat in his home state when he is getting thumping win in the country. Voters have voted wisely,” said political analyst Dr Shirish Kashikar.

Mr Hardik Patel, the young Patidar leader of the Congress, also failed to get votes. He joined the Congress just ahead of the election, and has campaigned extensively for the Congress in Gujarat as well as in other states. He had addressed as many as 45 public meetings in Gujarat but failed to convert that into votes. “Not the Congress, it is unemployment, education, farmers, women and issues of the ordinary citizen that are defeated. We will fight and we will win,” Mr Patel tweeted after the defeat.

The BJP has retained the Valsad seat in south Gujarat which is considered a bellwether seat because voters of this constituency have always voted for the winning side and it is said that whichever party wins the Valsad seat rules the country. Sitting MP Dr K C Patel has defeated the Congress’ candidate and MLA Jitu Chudhary here.