India   All India  24 May 2020  Security experts worry about hand sanitizers on aircraft
India, All India

Hand sanitizers in aircraft, so many of them, brings back ''Liquid bomb'' memories for those in aviation security 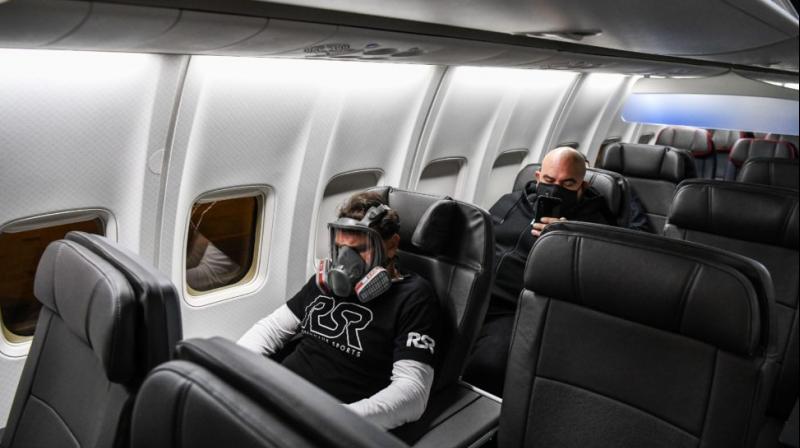 Hyderabad: Back in 1987, a liquor bottle filled with explosives and placed in a carry-on bag in an overhead bin helped terrorists crash a South Korean airliner. All 115 on board died.

Then, in 1994, Al-Qaeda member Ramzi Yousef, architect of the first World Trade Center bombing, detonated liquid nitroglycerin that he had taken on board a Philippine Airlines flight in contact lens solution bottles. One passenger was killed and several were injured in the incident.

In August 2006, a major terror plot was busted by the British police wherein terrorists plotted to detonate liquid explosives disguised as soft drinks carried on board airliners travelling from the United Kingdom to the US and Canada.

Terrorists using liquid explosives to blow up airplanes was a major challenge to aviation security starting the late 1980s which continued through the early 2000s. But now, in the post Covid-19 scenario, as flight services resume across the country from May 25, the Ministry of Civil Aviation's (MoCA) move to allow hand sanitizer bottles (not more than 350 ml) inside aircraft has re-ignited the debate over liquid explosives.

While MoCA decided to allow hand sanitizers inside aircraft after much brainstorming over the security threat it can pose to airplanes, there has not been a single instance to suggest that hand sanitizers, when combined with other chemicals, can be used as explosives.

But the fact that is a cause of worry is that some of the ingredients in alcohol-based sanitizers are highly flammable.

This is the new concern for the security agencies. Highly placed sources who took part in the brainstorming sessions which led to flight services being resumed, told Deccan Chronicle that among the many concerns that were raised by various agencies, the aspect of allowing passengers with 350 ml hand sanitizers inside aircraft was a cause of concern, especially as it is flammable.

The brainstorming among officials over liquid explosives and its quantities, the chemicals used in them and past incidents of terrorists using it all were discussed threadbare.

One of the ingredients in alcohol-based hand sanitizers is a combination of isopropyl alcohol and ethanol, which is flammable. For alcohol-based sanitizers, the flash point is 63 degrees fahrenheit, If stored at room temperature, it could ignite if it comes in contact with flames.

With hundreds of passengers carrying hand sanitizers, the agencies are looking at yet another challenge in aviation security.

''Across all airports, the terror threat has always been real and imminent. We have ETD checks (Explosive Trace Detection) in place besides all the advanced systems at the airports to detect explosives. Passengers were being allowed to bring quart-sized bag of liquids, aerosols, gels, creams and pastes in their carry-on bags but they were limited to travel-sized containers. Now, we will have every single passenger carrying hand sanitizers inside the aircraft which means presence of large quantities of sanitizers in the aircraft. It is a unique situation and will pose a huge challenge,'' a senior official from New Delhi said.

An explosives expert told Deccan Chronicle that though hand sanitizer is a high-energy material, there is no evidence so far to suggest that it can be used as an explosive.

''Though it does not explode, it can be ignited with just a spark. Even if it burns, it is low-flame but 350 ml may be enough to create a scare inside the aircraft. But if a group of terrorists were at work inside the aircraft, then obviously the quantity of flammable liquid is much higher which means more damage. It can pose a major threat,'' he explained.

While Deccan Chronicle's attempts to reach out to the Director General of Bureau of Civil Aviation and Security Rakesh Asthana proved futile, sources said that keeping the threat of liquid explosives in view, both BCAS along with Central Industrial Security Force (CISF) will take up regular reviews of this aspect of hand sanitizers.

''Once the flight services resumes in a calibrated manner, only limited number of people will travel. The real challenge will be once all flight services are resumed,'' he said.

''In extreme heat conditions, hand sanitizers can catch fire when exposed directly, which is not possible in the aircraft as it is cold inside,'' they explained adding that various scenarios involving terrorist operations too were discussed keeping in mind the chemicals in hand sanitizers.