India   All India  24 May 2020  Shramik Special train leaves UP natives stranded in Odisha
India, All India

Tall claims by the Railways and Maharashtra government fall flat 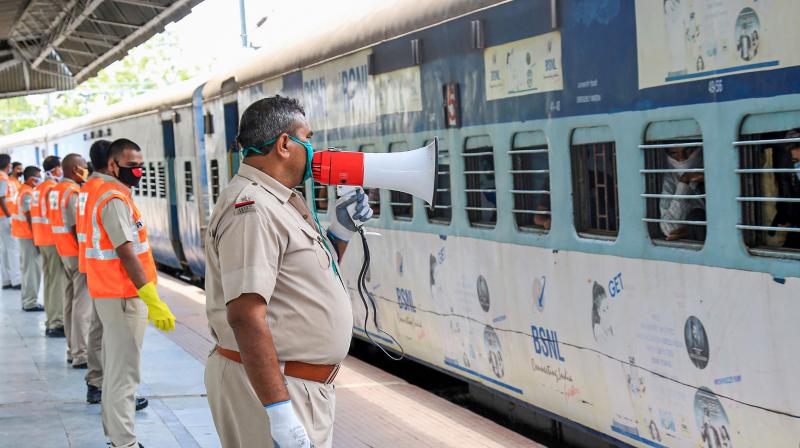 Mumbai: Tall claims by the Indian Railways and the Maharashtra government of helping guest workers reach their native places fell flat after two incidents came to light on Saturday.

The Vasai Road-Gorakhpur Sharmik Special to Uttar Pradesh, which left Mumbai on May 21, was diverted to a different route via Odisha due to "heavy traffic congestion".

In another incident, a group of guest workers were left stranded at Wadala TT police station since Saturday morning.

The workers were informed by the police three days ago that their journey back home had been finalised. However, at the last moment they were told that their train has been cancelled. As a result, these migrant workers had to wait at the police station for almost an entire day. They had sought police permission to return to their home states at the beginning of May.

A 30-year-old construction labourer Mubarak Hussain, resident of Bharati Kamala Nagar in Wadala, said he submitted an application to the Wadala TT police in the beginning of May along with 25 other guest workers. Out of the total 25 workers, 15 have commenced their journey either by boarding a truck, by riding a bicycle or walking. There are still 10 workers, hoping to get a seat in a Shramik Special train.

Hussain said, “The police have been calling us since May 21 everyday to inform us that our names have been finalised for travel. On May 23, we received a call at around 2 am (on the intervening night of Friday and Saturday) for the same. We arrived with our luggage at 5 am in the morning and later around 9 am, we were told that the train has been cancelled.”

Another labourer Istak Ahmad (39) said that he had also submitted the application in the start of May but did not get any response. Hence he decided to cycle back to his native. “I cycled up to Bhusawal and later boarded a truck for Basti district in UP,” he added.

Refuting allegations of the migrant labourers, Dr Saurabh Tripathi, deputy commissioner of police (DCP) of zone-4, said, “These are base allegations. We have been only intimating them to prepare themselves to leave in short notice. That is how we alert them generally because arriving at the police station without confirmation is of no use. We request the public not to gather near police stations and risk their life as well as others.”

In another incident, The Vasai Road-Gorakhpur Shramik Special train to Uttar Pradesh was diverted to a different route via Odisha due to heavy traffic congestion. The train that left Vasai Road station in Mumbai on May 21 was diverted via Bilaspur, Jharsuguda, Rourkela, Adra and Asansol stations, Western Railway PRO Ravindra Bhakar said.

Due to heavy traffic congestion on Itarsi-Jabalpur-Pt. Deen Dayal Dayal Nagar route, trains will now run on the diverted route through Bilaspur, Jharsuguda and Rourkela stations in Odisha, he said.

Meanwhile, the railways has ferried around 32 lakh migrant workers on board 2,570 ‘Shramik Special’ trains since May 1, according to official data. It also said that over the next 10 days, it will operate 2,600 more trains ferrying 36 lakh guest workers home.

The railways is bearing 85 per cent of the total cost of running each of the trains while the rest is being borne by the states in the form of fares.