Mr Faure also tried his hands on the spinning wheel (charkha) at the ashram and understood the process of producing Khadi strands. 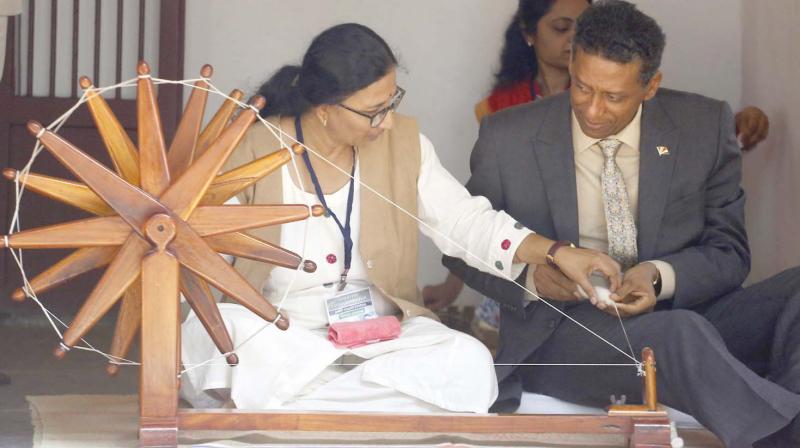 Seychelles President Danny Faure (right) tries his hands on a spinning wheel during his visit to Gandhi Ashram in Ahmedabad on Saturday. Mr Faure is on a six-day visit to India. (Photo: AP)

Ahmedabad: The ideals of Mahatma Gandhi were still relevant, Seychelles President Danny Faure said here on Saturday, adding that the principle of non-violence should be taught to children across the world.

The visiting leader of Seychelles also paid rich tributes to the icon of India’s freedom movement.

Faure, who landed in Gujarat on Friday evening as part of his India tour, visited the Sabarmati Ashram on Saturday, where Gandhi lived between 1917 and 1930.

“The principle of non-violence is what we need to teach the children of our world and what was expressed by Gandhi many years ago remains relevant even today — an eye for an eye will make the world blind,” the President of the island nation wrote in the visitors’ book at the ashram.

Ashram trustee Kartikey Sarabhai and secretary Amrut Modi showed him around the premises, which house an archive, an exhibition centre and the “Hriday Kunj”, the place where Gandhi used to live.

“Faure showed a keen interest about the life and times of Gandhiji. He sought to know why Gandhiji chose Ahmedabad and what exactly did he do during his long stay here.

“He also wanted to know the details about the Dandi March (a civil disobedience movement against the British rule), which was started from the ashram,” Mr Modi told reporters.

Mr Faure also tried his hands on the spinning wheel (charkha) at the ashram and understood the process of producing Khadi strands.

He was gifted two books on Gandhian philosophy by the ashram. In return, Faure gifted a book on his country, Modi said.