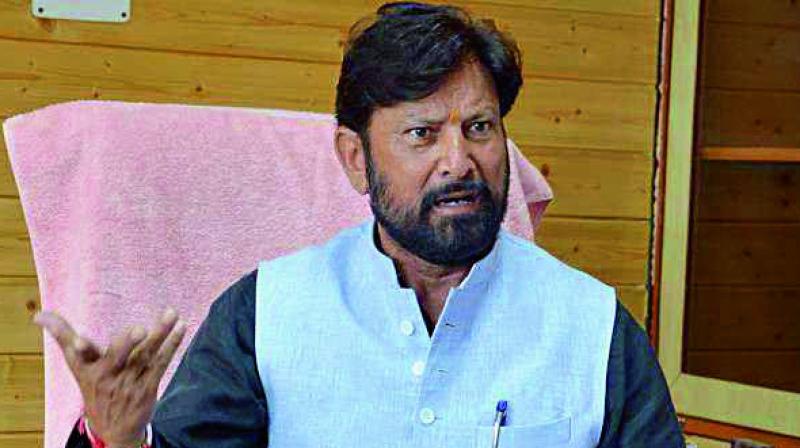 Srinagar: Former Jammu and Kashmir minister and BJP leader Choudhary Lal Singh has warned Kashmiri journalists of meeting the fate their colleague Shujaat Bukhari did if they fail to “draw a line of journalism and think about how to live”.

Mr. Singh who was among two BJP ministers in Mehbooba Mufti-led PDP-BJP government forced to quit for their allegedly siding with the accused in the gang-rape and murder of an 8-year-old nomadic girl in the State’s Kathua district earlier this year said at a press conference in Jammu that the Kashmiri journalists were creating a “wrong narrative” regarding the incident.

“They (Kashmir’s journalists) have created wrong atmosphere about the whole case. Now, I would like to ask them to draw a line of journalism and think about how to live,” he told a press conference in Jammu. He then referring to the recent gruesome murder of ‘Rising Kashmir’ editor-in-chief Syed Shujaat Bukhari said, “Are they waiting for similar incident that has happened with Basharat? (Basharat Bukhari is Shujaat brother and was a minister in the PDP-BJP government). It’s better to control yourself before situation gets worse. They must draw a line so that brotherhood in the State remains intact and we also join the journey of development.”

Kashmir Editors Guild (KEG) termed Mr. Singh’s statement as being “criminal” and said that it is a direct threat to the Kashmir media. “Invoking the brutal assassination of senior editor Shujaat Bukhari, Singh has suggested the Kashmir media to draw a line and to decide if they have to work the way he was working”, it said . It added that the BJP leader’s statement indicates that he holds some information about Bukhari’s murder and must be investigated.

“KEG reserves the right to lodge a police case against the lawmaker who, earlier as well, named a number of reporters for his fall from grace in wake of the Kathua probe, now in a trial stage. The Congress-turned-BJP politician has seemingly talked on Kashmir media from a point of strength and possible information about the recent killing in Srinagar,” said the statement. It also said that the KEG is perturbed over the sluggish pace with which the investigations in Bukhari’s murder are moving ahead. It further said, “Kashmir media has survived hell at huge costs in last three decades. KEG will fight all the onslaughts aimed at preventing it from recording the contemporary history, honestly and objectively”.

The NC has termed Mr. Singh’s statement as a brazen attempt to muzzle the media in Kashmir and said that it has exposed “an intolerant, vituperative and criminal mindset that threatens to subvert freedom of speech and democracy in the State”.

The party spokesperson Junaid Azim Mattu said, “We condemn this outrageous threat in the strongest of terms. It should be treated as a criminal attempt to incite violence against journalists and the J&K police should register an FIR under the relevant statutes of the law. There is absolutely no legal excuse for inaction in this case and an attempt to brush this under the carpet would be unacceptable and will discredit both the writ of the Administration and also muzzle free speech in the State.”

Peoples’ Democratic Party (PDP) leader Rafi Ahmad Mir said that the party condemns the “threatening, foul and abusive” statement of the BJP leader and endorsed the demand that the police should take cognizance of the matter and immediately lodge an FIR.

NC’s Jammu-based spokesman Madan Mantoo said, “The BJP should rein in opportunistic loose cannons, who are demonstrating most uncivil behavior after losing the power”. He added that a threat to journalists is not only an attack on the freedom of expression but also against the people’s right to be informed.

Independent MLA and leader of Awami Itehad Party (AIP) Engineer Rashid said Mr. Singh’s statement only “exposes the mindset of communal forces”. He alleged that the BJP leader who has earlier also issued controversial statements including threatening the Gujjars of Jammu of the repeat of 1947 communal violence enjoyed “complete blessings of New Delhi and has been given a free hand to use even Indian tricolor to give Rasana incident a communal colour”.

The AIP leader said, “Everyone knows how difficult it is for any journalist to work in conflict zones like Kashmir. Threatening journalists by someone who has been a minister and is a sitting MLA is unacceptable and administration must ensure action against him”.

He added that Mr. Singh “proved so ignorant by saying let Kashmiri journalists not forget what fate Basharat met, forgetting that Basharat Bukhari was his colleague in the Mehbooba Cabinet and Shujaat Bukhari is his (Basharat Bukhari’s brother).”