India   All India  24 Jun 2018  Many heroes belittled to glorify one family, says Modi
India, All India

Many heroes belittled to glorify one family, says Modi

Modi said the party that ruled the country for maximum years never trusted people and their hard work. 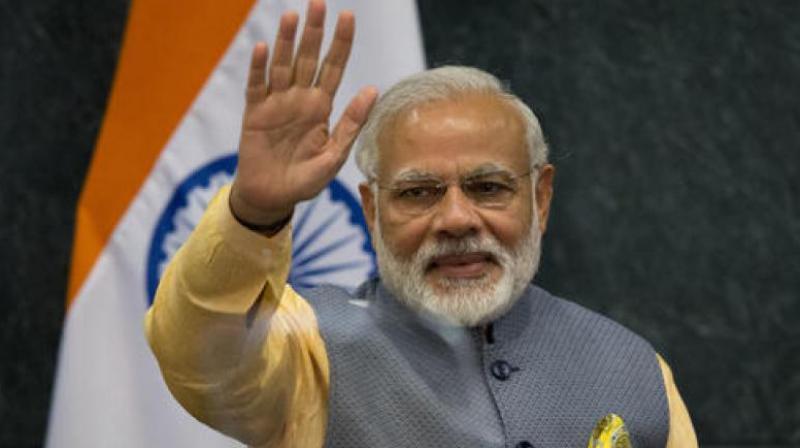 Rajgarh: Prime Minister Narendra Modi said on Saturday that to glorify one family, deliberate attempts have been made to belittle the contributions of other towering leaders in nation building, as he paid rich tributes to Bharatiya Jana Sangh (BJS) founder Syama Prasad Mookerjee.

In a veiled attack on the Congress, he said it was spreading “lies, confusion and pessimism” and was cut off from the ground reality.

“It is unfortunate that to glorify one family, deliberate attempts were made to belittle the contributions of other towering personalities in the country,” Mr Modi told a public meeting after launching the Mohanpura Irrigation Project in Rajgarh district of Madhya Pradesh.

He said the party that ruled the country for maximum years never trusted people and their hard work.

He said when the Congress ruled the state, Madhya Pradesh was called a Bimaru state, but the BJP government pulled the state out of that tag. “The Congress never saw this as an insult to the people of the state. The BJP has worked hard to remove this tag,” he added.

Mr Modi said in the past four years at the Centre and 13 years in Madhya Pradesh, the BJP has worked for the uplift and empowerment of poor, farmers and deprived sections of society.

“In the last four years, we never spoke of frustration and dismay. We are the ones who are marching ahead with confidence,” he said, adding that people believed in the BJP and its government, which was working for their welfare.

“People trust the BJP and its government. Your huge presence here is a proof of it. But those spreading lies, confusion and pessimism are cut off from the ground reality.”

Recalling Mookerjee’s contribution to the country, Modi said, “His vision inspires us even today and helps us come out of despondency.”

Mookerjee believed that the government should fulfil the dreams of its people and improve the life of the poor, Mr Modi said.

His thoughts and actions for the country’s industrial policy, things he had done in the areas of education, women empowerment and nuclear policy were far ahead of his times and they are still relevant, the Prime Minister said.

“His vision was to impart skills to the youth and give them opportunity so that they become capable of serving the country. Programmes such as Startup India and Make in India are a reflection of his ideas,” he said.

“Today BJP’s government at the Centre and in the states are running based on the vision of Mookerjee,” he added.

He said Mookerjee died in a “suspicious” manner in Kashmir, where he was on a visit in 1953.

“It is a coincidence that today is the death anniversary of Syama Prasad Mookerjee. On June 23, he died in a suspicious manner in Kashmir. I remember him on this occasion.”

The BJP, the successor party of the BJS, observes June 23 as Balidan Diwas.