20 years of Kargil War: Facts about the 1999 India-Pakistan conflict 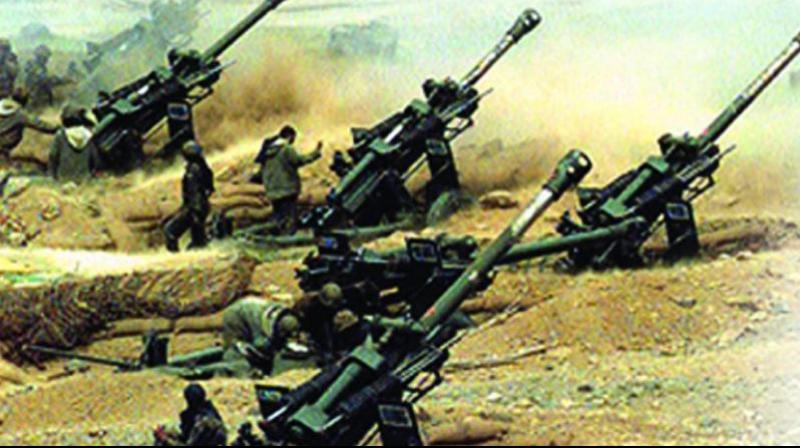 It is observed in the remembrance of recapturing the towering hills in Kargil district in Ladakh division subsequent the occupancy of Pakistani troops. (Photo: File)

Mumbai: The Kargil war was one of the fiercest conflict between India and Pakistan. This year India will be celebrating 20 years of the Kargil War on July 26.

It is observed in the remembrance of recapturing the towering hills in Kargil district in Ladakh division subsequent the occupancy of Pakistani troops.

Here are the facts that you need to know about the war:

- The war took place between May and July of 1999 in Jammu and Kashmir's Kargil district.

- Kargil was the part of Baltistan district of Ladakh before the partition of India 1947 and was separated by the LOC after the first Kashmir War (1947-1948).

- The conflict began with the infiltration of both Pakistani troops and terrorists into Indian territory.

- Pakistan's main objective was to cut the connections between Ladakh and Kashmir and to create tensions at the Indian border. The Pakistan Army had sent its soldiers in the name of intruders in the winters to take over the area.

- The Kargil ‘war’, as it is called, was not a conventional war.

The territory intrusion by Pakistan did not result in a full-fledged war but was limited to a specific area with limited army involvement.

Another important factor was that Pakistan had not ‘declared’ a war but had claimed that the intrusion was by Mujahideen and not their Army.

- Pakistan’s major agenda was to bring the Kashmir issue on the international level and leverage their positions in Kashmir to get what they want. They failed on both fronts as the majority of the community condemned their actions and called for a retraction. China too did not support Pak but adopted a neutral stand.

- Based on information from local shepherds, the Indian Army was able to ascertain the points of incursion and launch "Operation Vijay".

Vijay Diwas: The Indian Army declared the mission successful on July 26, 1999, and since then every year it has been celebrated as Kargil Vijay Diwas.

Casualties: The victory for India came at a very high price. The official death toll for India was 527 and for Pakistan, it was between 357 and 453.

Read | 20 years of Kargil War: How Major Wangchuk and his men snatched back Chorbat La

- The Pakistani soldiers had positioned themselves at higher altitudes which gave them an advantage in combat, as they could fire down at advancing Indian troops.

- Pakistan shot down two Indian fighter jets while another fighter jet crashed during the operation.

- Pakistan asked the US to intervene, but then-President Bill Clinton declined to do so until Pakistani troops were withdrawn from the Line of Control.

- As Pakistani troops withdrew, the Indian armed forces attacked the rest of the outposts, managing to get back the last of them by July 26.

- Until July 4, 1999, the Indian Army had captured strategic peaks like Tiger Hill and Tololing.

- The war saw the use of Bofors FH- 77B artillery guns.

- Although it is said that the USA refused GPS help, Israel helped India with ordnance and armaments and provided UAVs (Unmanned Aerial Vehicles or drones).

Years later in 2016, India developed its own IRNSS system that set-in motion in 2016.

- Kargil war had been the one where a war was fought between two nuclear states. India had conducted its second nuclear tests in 1998 followed by Pakistan’s first. So the war in 1999 was the first between the two nations after gaining nuclear capabilities. It was also one of the few wars involving two nuclear nations.

- The Indian Air Force also used MiG-27 and MiG-29 against Pakistani troops and the bomb was also dropped wherever Pakistani soldiers occupied the area. With the help of MiG-29, several targets of Pakistan were attacked with R-77 missiles. Also, IAF’s MiG-21s and Mirage 2000 were extensively used in the Operation Safed Sagar during this war.

- This conflict brought out the best in Indian soldiers.

- Pakistan initially denied any role in the conflict, saying India was facing off with "Kashmiri freedom fighters."

However, it later awarded its soldiers medals for the conflict, removing any doubt of its involvement.

- India increased its defence spending in the budget presented the year after the Kargil war, but it also resulted in procurement irregularities, like the one in the purchase of coffins for the soldiers who died in combat.

- The US and the West including the G8 nations identified Pakistan as the aggressor and condemned it. It was the first ever war that beamed ‘LIVE’ on Televisions in India.