India   All India  24 Jun 2019  An ode to empathy through dance, a visual poetry that connects through communion
India, All India

An ode to empathy through dance, a visual poetry that connects through communion 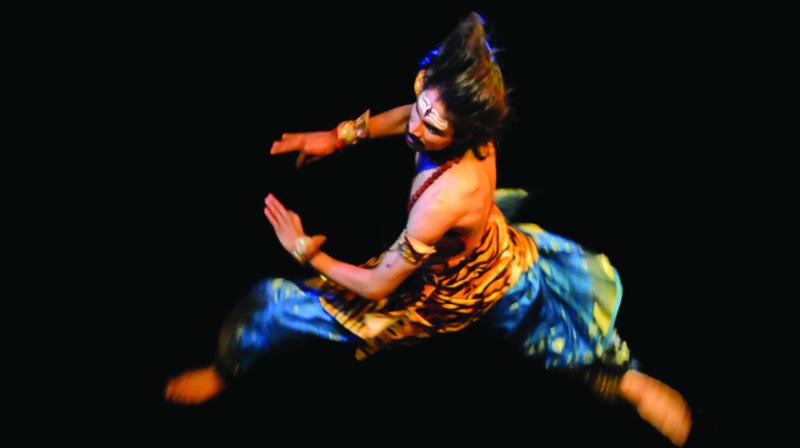 Some performances from the program ‘Ode to Empathy’. (Photo: MADHUSUDAN S. MENON)

In the sea of artistes today there are some who are great performers, some who are superb with their PR skills, some have amazing organisational abilities but there are very few who have all that it takes to be the best. One such artist is Bharatanatyam exponent, teacher, choreographer and art curator Kalashri Lata Surendra, who is blessed to have it all — she is not just a jaw dropping performer but has the divine ability to get the dance community together and bind them together with her warmth and creativity.

Recently, Lataji did just that, she got all the well-known dancers of Mumbai on one stage — together celebrating dance like never before, using the didactic potency of dance to stir the human spirit and hearts in a unique and unusual dance program — “Ode to Empathy” — featuring several dancers in varied disciplines aptly organised by Lataji. She is the section president of the Dadar-Mumbai section of the International Dance Council which is affiliated to secretariat Athens and the Council of International Dance (CID) headquarters in Paris, France. For those who are not aware of CID, recently it just concluded the mega 52nd world congress of dance research with delegates from all over the world in Mumbai.

One witnessed the visual quilt of words, chords and rhythms merge to define empathy — the theme of the festival. The absorbing afternoon had dancing feet in various styles gather the souls of saints and poets and bringing them to life through their chosen dance forms. The presiding guest, the legendary Manipuri exponent Padmashri Darshana Jhaveri set the prelude with Radhabhav through Manipuri dance. Program head, dance of the National Centre of Performing Arts (NCPA) Swapnokalpa Dasgupta mirrored the love that sometimes seeks no definition nor can be given a name through the verses of Rabindranath Tagore etching his love for Kadambaridevi.

Renowned Manipuri exponents Latasanadevi and Purbita Mukherjee presented oneness through the synergy of rhythms draped in the gracefully executed Telena choreographed by Guru Bipin Singh. The dance form of Mohiniattam saw its unfolding grace through the disciples of renowned mentor and exponent Geetha Vijayshanker urging the Lord to answer the call of his devotees and assuage the grief inherent in the flux of life. Talented disciples of Guru Lata Raman, Anjali Satheeskumar and Krishika Venkatesh awakened hearts to the anchoring relief in the chanting of Shivashtakam. Mayurbhanj chau through the seasoned performer Ankit Pahadia merited an applause from the audience in the controlled dexterity of displayed kinesthetics. Meera’s urging of the Lord to relieve the world of its ongoing refrain of misery and challenges was evocatively mirrored by the disciples of renowned Bharatanatyam exponent and teacher Padmini Radhakrishnan. 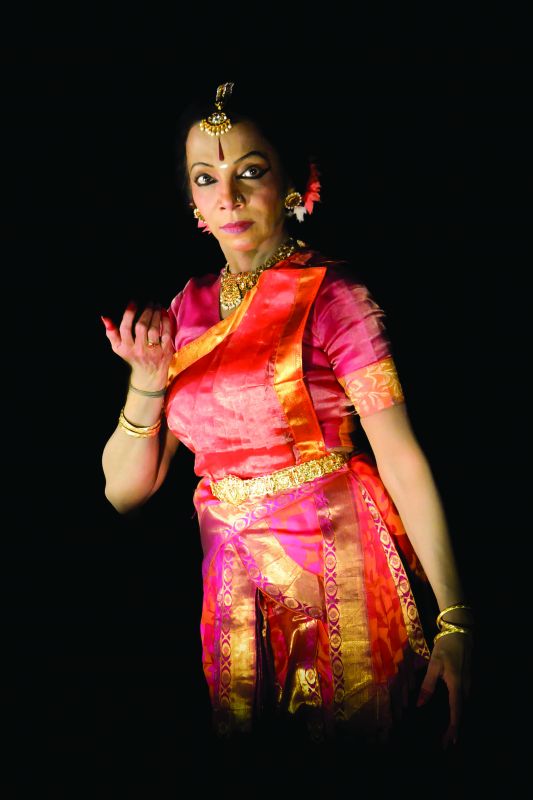 The heart as a huge home of emotions housing temporary visitors and its foolish concern with transience was reflected through contemporary folds by established performer Abhishek Rathod and team and it was followed by a visual treat of two elements in synchronised harmony through an abstract duet kathak performance by Sanjukta Wagh’s Beej Dance Company. Bharatanatyam exponent Nandini Ganesan, disciple of Guru Kalasadan Mani and Guru Chitra Visweswaran beautifully delineated the celebration of life through the devotion and surrender of the young and eternal Maarkandeya. Grief and pride — a tribute to our armed forces was sheathed through Bharatanatyam by Dr Suman Badami and her disciples whereas Kuchipudi became the medium to bring to life the curtaining tears in Shabari’s eyes upon meeting her Lord Rama by Dr Sailaja Desai and her disciple Sindhuja Desai. Accomplished Manipuri exponent and teacher Anusua Roy presented Mandila Nartan with her students. Talented Bharatanatyam performer and teacher Jenita K. Pillai with Alina Mathew of Natana Kalaa Academy responded with the rhythms dancing through the endearing form of Lord Ganesha followed by the rhythms coming to a climax through an energised folk dance by Jigar and Suhrad Soni’s School of Garba.

Kathak by disciples of Manisha Jeet stole everybody’s hearts with the choreography bringing to life the Marathi poem Aagadi ani jamin by Kusumaagraj where the conundrum of man and machine violating the earth is depicted through the arrogance of the train and the patient Mother Earth. Guru Moli Siddharth and disciples of Kalangan mirrored an ode to the oneness that is India, bringing together the myriad folk and classical dance forms. Kathak defined the ode to empathy through the senior exponent Paullumi B. Mukherjee, whereas Richard’s Academy of Dance and Arts had its founder Richard, through the contemporary folds, bringing to life empathy through a poem penned by him. Dr Sunil Sunkara and Rohan Waghmare, two dancing scientists from the institute of chemical technology, Mumbai presented Tears of empathy, drawing a parallel between Meghnad and Laxman and Charushila Golam with Shyam Bhagat combined theatre and dance to etch the saga of debt-ridden farmers. Pandari, the crown of all as the Teertha Khshetra was defined by disciples through the well-knit choreography of Pavitra Bhat and the euphoria of the magical flute of the Lord brought to life by disciples of Nisha Gilbert.

The saga of Salabega, the Muslim religious poet, was depicted with an astute awareness of the kinesthetics of Odissi by renowned exponent and teacher Ankur Ballal. Kathak by a seasoned performer, the beautiful Nidhi Prabhu etched the loneliness of a husband who realises how indispensable his wife is through a poem — Akelapan — and the graceful exponent and teacher, Vrunda Shukla, reached out to the theme through the Bharatanatyam disciples of mentor Prema Nagasunderam and highlighted the fact that man may be destroyed but not defeated through Bharatanatyam. Dr Jayashree Rajagopalan, renowned teacher, choreographer and a research scholar, underlined empathy through Bharatanatyam. Disciples of Mentor Sushma Gopinath of Navarasa Dance Academy evocatively etched Kunti through Mohiniattam followed by colourful kathak choreography by Anu Harshal with other disciples of the Late Taalmani Brijraj Mishra complimented by absorbing Kuchipudi by disciples of kalamandalam Vijayshree Pillai, a kathak solo by senior exponent and teacher Smriti Raj, a meticulously executed Bharatanatyam solo by Snigdha Menon from Guru G.V. Ramani, Natya Kala foundation, synchronised and gracefully presented Kathak by Rashmi Mishra and disciples, semi-classical and fusion by Urban Clicks — folk fusion with a message by disciples of K.V. Rajan ultimately rounded off with a splendorous folk by CID member Mukesh Darbar that had all joining in defining dance truly as a bridging metaphor — connecting hearts.

The highlight of the show was an evocatively executed Lavani by Nilesh Auti, a passionate artist, painter and dancer, who depicted the transformation of a young girl as she steps into womanhood. Kudos to Kalashri Lata Surendra for coming up with innovative themes to have dance practitioners awaken to the didactic potency of dance that could bring to life through empathy — all that is life!

Organising a show of this stature was not simple at all, speaking about the show, Lataji said, “Sympathy transforms to empathy when another’s suffering becomes one’s own. As dancers we are always gathering existence within us, in an inside out journey that sheds the world’s tears and mirrors the world’s joys through dance. Dancers define empathy through the unfolding visual poetry of movements sheathed in diverse styles, a language that connects through communion and not communication.”

Lata Surendra is one rare artist who has the ability to impress one and all not only with her talent of dance but also through her impeccable words and ideas. One thing I am sad about is that I could not be a part of her show as I was travelling for another event, but I hope that the next time the dancing diva calls me I am available to execute her idea on the floor.

Sandip Soparrkar holds a doctorate in world mythology folklore, is a World Book Record holder, a well known Ballroom dancer and a Bollywood choreographer who has been honoured with Dada Saheb Phalke award, three National Excellence awards and one National Achievement Award by the Government of India. He can be contacted on sandipsoparrkar06@gmail.com