There are various remedies of vitiligo — allopathic, surgical and adjunctive. But none of the therapies has satisfactorily cured the disease. 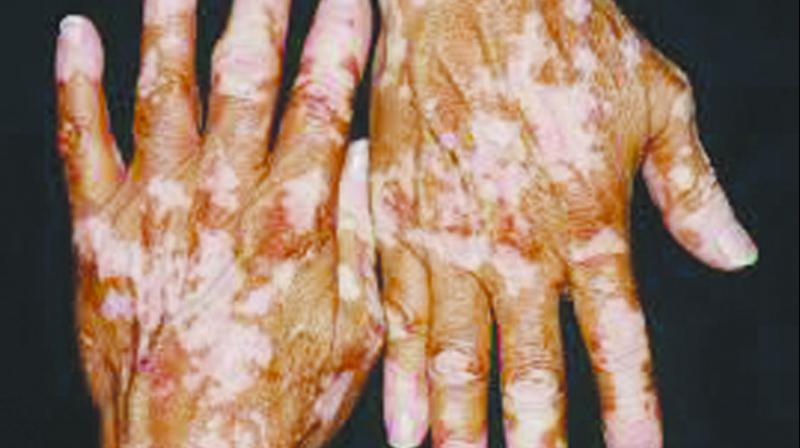 Vitiligo is not contagious or life-threatening. The world wide incidence of leucoderma has been reported to be 1-2 per cent. In India, its incidence is around 4-5 per cent.

New Delhi: Herbal drug Lukoskin developed by the Defence Research and Development Organisation (DRDO) for management of leucoderma or white skin patches seems to be finding greater acceptance among patients suffering from the medical condition that carries huge social stigma. Buoyed by the positive results, the DRDO team is now working on an improved version of Lukoskin.

In a recognition for the drug’s efficacy, the Narendra Modi government conferred DRDO senior scientist Hemant Pandey with the prestigious “Science Award” on National Technology Day for developing Lukoskin to fight vitiligo, the medical term for the disease that causes loss of skin colour in blotches.

As people mark June 25 as World Vitiligo Day, Dr Pandey, who presently heads herbal medicine division of the DRDO’s lab Defence Institute of Bio-energy Research (DIBER) at Pithoragarh said he is working on an advanced version of Lukoskin which is presently manufactured and marketed by Delhi-based AIMIL Pharma Ltd.

“There are various remedies of vitiligo — allopathic, surgical and adjunctive. But none of the therapies has satisfactorily cured the disease. These are either costly or have very low level of efficacy and develop side-effects like blister and irritation in the skin with the result most of the patients discontinue the treatment,” said the scientist

Vitiligo is not contagious or life-threatening. The world wide incidence of leucoderma has been reported to be 1-2 per cent. In India, its incidence is around 4-5 per cent.

“We developed the formulation from Himalayan herbs after exhaustive scientific studies,” said Dr Pandey, who earlier received the Agri-Innovation Award for developing the Lukoskin that is available in the form of ointment and oral liquid.

The ointment has seven herbal ingredients having properties such as skin photo-sensitiser, anti-blister, anti-irritation, anti-septic, wound healing and copper supplementing properties while the oral dose has been formulated to check the emergence of new spots, added Dr Nitika Kohli, an ayurveda expert.

In some parts of Rajasthan and Gujarat, incidence of vitiligo is as high as 5-8 per cent, much about the national average of 1-2 per cent.

“This skin disorder is considered a social stigma in India where people confuse it with leprosy which, in fact, is bacterial infection,” added Dr Pandey.

But this auto-immune condition can be life-altering. Some people develop low self-esteem and serious depression, an observation which prompted Dr Pandey to work on advanced version of Lukoskin drug for better results.

The fact that vitiligo does not impact one’s physical activities is demonstrated by some of the celebrities and public figures who carried out their public life without any inhibition. These include people like late American singer Michael Jackson and Union minister S.K. Gangwar.