JNU was filled with a patriotic spirit as the varsity observed 'Kargil Vijay Diwas' on Sunday in honour of the 1999 war martyrs. 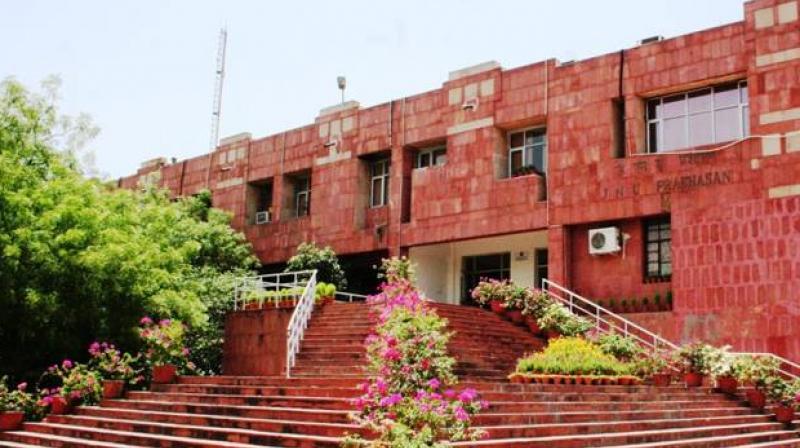 At the event, women family members of soldiers who died fighting in the Kargil war were felicitated. (Photo: PTI)

New Delhi: Jawaharlal Nehru University (JNU), which was at the centre of a controversy for alleged anti-India slogans in 2016, was filled with a patriotic spirit on Sunday as the varsity observed 'Kargil Vijay Diwas' to mark the sacrifices of Indian soldiers in the 1999 war.

It started with the JNU faculty and students along with the kin of Kargil martyrs and members of Veterans India, a body of ex-servicemen, holding a march with a 2,200-feet-long tricolour and paying tributes at the Wall of Heroes - located in JNU's convention centre where 21 portraits of Param Vir Chakra awardees are exhibited.

The programme also witnessed a performance by the army band. At the event, women family members of soldiers who died fighting in the Kargil war were felicitated.

JNU Vice Chancellor M Jagadesh Kumar termed the programme as "historic", and said it was an important day to remember the sacrifices made by the Army and other security forces for the country.

The Vice Chancellor also said the varsity has asked union ministers Dharmendra Pradhan and VK Singh, who were present at the function, to help them (JNU) procure an army tank which can be put up on display in the campus so that students can be reminded of the sacrifices and valour of the soldiers.

"I request General VK singh to help us procure an army tank so that we can place it at a prominent place in JNU. The presence of the tank will remind thousands of students about the great sacrifices & valour of our Indian Army," Mr Jagadesh Kumar said.

He further said "In no other country, is the Army being questioned. As India is a democracy, some powers dare to show India in poor light. May God give such people better sense".

Minister of State for External Affairs V K Singh was also present at the event. "The outside forces never succeeded with their powers. They became successful only when an insider helped them out. The Indian veterans have been trying to instil the spirit of unity in every Indian heart," the former Army chief said.

He added that Indian soldiers work with the feeling that the nation is above all and there is no division within the Army on the grounds of religion, caste and community. He said that the Indian Army is the best in terms of observing human rights.