The advisory has been sent to the states and Union territories following a Supreme Court directive issued in this regard on July 17. 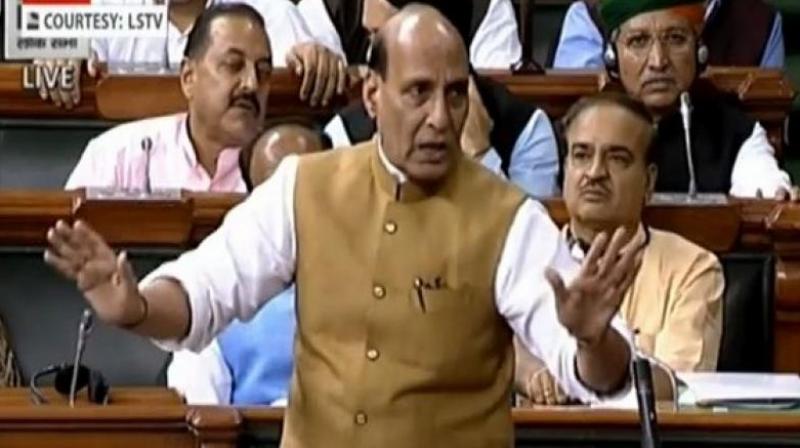 Union Home Minister Rajnath Singh said in Parliament that the government will enact a law. (LSTV GRAB via ANI)

New Delhi: To check incidents of mob killings, the Centre has asked all states to appoint a superintendent of police-level officer in each district, set up a special task force for gathering intelligence and closely monitor social media contents, so that no one is attacked on the suspicion of child kidnappers or cattle-smugglers.

The Union Home Ministry also said wherever it is found that a police officer or an officer of the district administration has failed to comply with the directions to prevent, investigate and facilitate expeditious trial of any such crime of mob violence and lynching, it should be considered as an act of deliberate negligence and misconduct, and strong action must be taken against the official concerned.

The advisory has been sent to the states and Union territories following a Supreme Court directive issued in this regard on July 17.

"Incidents of violence and lynching by mobs in some parts of the country fuelled by various kinds of rumours and unverified news such as child lifting, theft, cattle smuggling etc, are a matter of serious concerns. Such instances of persons taking the law in their own hands run against the basic tenets of the rule of law.

"All state governments, UT administrations and their law enforcement agencies are requested to implement the directions of the Supreme Court in letter and spirit. A detailed report on the action taken in the matter may please be sent to the ministry at the earliest," the advisory sent to chief secretaries and DGPs of the states and UTs said.

This is the second advisory on the issue, within a month.

The move came in the wake of constitution of a Group of Ministers (GoM), headed by Home Minister Rajnath Singh, and a committee, headed by the Union home secretary, to suggest legal framework to check incidents of lynching.

Rajnath Singh today said in Parliament that the government will enact a law, if required, to curb incidents of lynching.

The Supreme Court directive said, "The state governments shall designate, a senior police officer, not below the rank of Superintendent of Police, as Nodal Officer in each district. Such nodal officer shall be assisted by one of the DSP rank officers in the district for taking measures to prevent incidents of mob violence and lynching."

They shall constitute a special task force so as to procure intelligence reports about the people who are likely to commit such crimes or who are involved in spreading hate speeches, provocative statements and fake news, it said.

The state governments shall forthwith identify districts, sub-divisions and/or villages where instances of lynching and mob violence have been reported in the recent past. The process of identification should be done within a period of three weeks from July 17.

The secretary, home department, of the states concerned shall issue directives/ advisories to the nodal officers of the concerned districts for ensuring that the officer-in-charge of the police stations of the identified areas are extra cautious if any instance of mob violence within their jurisdiction comes to their notice.

The nodal officer, so designated, shall hold regular meetings (at least once a month) with the local intelligence units in the district along with all SHOs of the district to identify the existence of the tendencies of vigilantism, mob violence or lynching in the district and take steps to prohibit instances of dissemination of offensive material through different social media platforms or any other means for inciting such tendencies, the apex court directive stated.

The nodal officer shall also make efforts to eradicate hostile environment against any community or caste which is targeted in such incidents.

The Director General of Police shall issue a circular to the Superintendents of Police with regard to police patrolling in the sensitive areas keeping in view the incidents of the past and the intelligence obtained by the office of the Director General.

All law enforcement and intelligence agencies of the state governments shall monitor the social media platform and shall take action under the legal provision contained in Information Technology Act and other relevant law to curb and stop dissemination of irresponsible and explosive messages, videos and other material on various social media platforms which have a tendency to incite mob violence and lynching of any kind.

The police should register FIR against persons who disseminate irresponsible and explosive messages and videos having content which is likely to incite mob violence and lynching of any kind.

Wherever it is found that a police officer or an officer of the district administration has failed to comply with the aforesaid directions in order to prevent and/or investigate and/or facilitate expeditious trial of any crime of mob violence and lynching, the same shall be considered as an act of deliberate negligence and/or misconduct for which appropriate action must be taken against him/her and not limited to departmental action under the service rules, the Supreme Court had said.

Departmental action shall be taken to its logical conclusion preferably within six months by the authority of the first instance, it had said in the directive.