India   All India  24 Jul 2018  Grant equal protection to all irrespective of caste: MHA advisory to states
India, All India

Grant equal protection to all irrespective of caste: MHA advisory to states

The advisory comes amid outrage over the murder of a 28-year-old man at Alwar in Rajasthan over suspicions of cow smuggling. 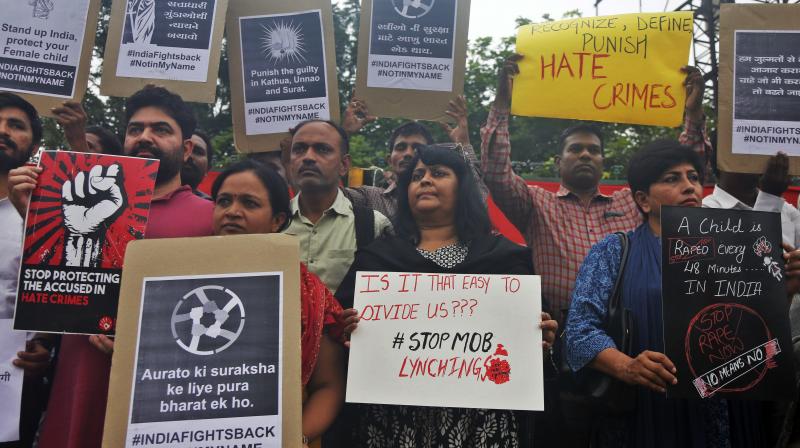 New Delhi: In a fresh advisory, the Ministry of Home Affairs asked the state governments to grant "equal protection of law to all citizens irrespective of caste, creed or religion" and asked states to take "effective measures" against mob killings.

The advisory comes amid outrage over the murder of a 28-year-old man at Alwar in Rajasthan over suspicions of cow smuggling. Initial investigations have indicated laxity and delay of three hours by Rajasthan police in taking the victim to hospital which was just 20 minutes away.

There have also been allegations that the policemen expected to protect Akbar Khan, alias Rakbar, may have also assaulted him.

Rajasthan Home Minister Gulab Chand Kataria on Tuesday said the man died in police custody and it may have been possible to save his life if the policemen had not delayed in taking him to hospital.

The Home Ministry advisory on mob lynching, the second this month, was issued on Tuesday.

The first one was issued on July 4 after several cases of mob killings fuelled by rumours of child lifting and kidnapping for organ trade.

The latest advisory also told states that it was their responsibility to control crime and protect lives of people and pointed to the Supreme Court's directions to take preventive, remedial and punitive measures to curb incidents of mob killing.

One of the measures recommended by the apex court was to enact a tough law that could have a deterrent effect.

The home ministry had initially decided against any change in the law but after pressure mounted following fresh case of cow vigilantism from Rajasthan, it prompted the government to explore this possibility.

On Monday, the centre announced that a group of ministers headed by Union Home Minister Rajnath Singh would take a call on enacting a law on mob killing after receiving the recommendations of officials.

"I want to make it clear that the government is not just concerned but has taken lynching incidents very seriously," Rajnath Singh told the Lok Sabha after Opposition members raised the issue days after a cattle farmer was killed allegedly by cow vigilantes in Rajasthan's Alwar.

Rajnath Singh has, however, attempted to blunt criticism from Congress over claims that mob killings have gone up after the NDA government came to power in 2014, arguing that the anti-Sikh riots in 1984 after the then Prime Minister Indira Gandhi's assassination was the biggest incident of mob lynching.