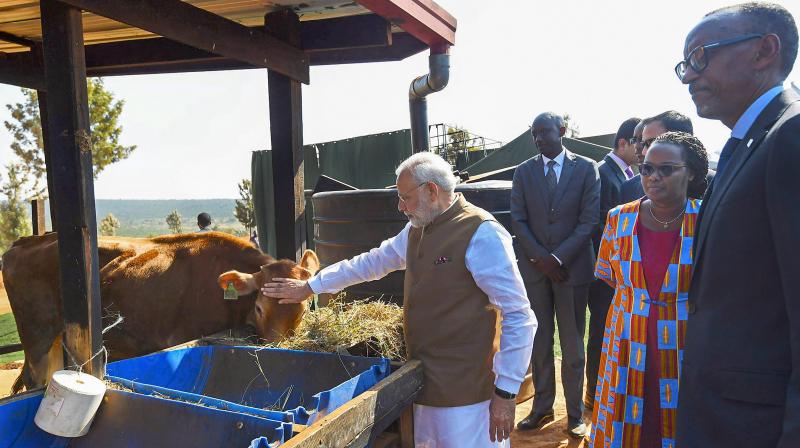 The Girinka Programme was initiated by President Kagame in 2006 to provide one cow per poor family for their nutritional and financial security.

PM Modi, who is on a two-day state visit, gifted these cows to poor families during a function at Rweru Model Village.

Speaking on the occasion, PM Modi appreciated the Rwandan government's 'Girinka Programme'. He said people in India too would be pleasantly surprised to see the cow being given such importance as a means of economic empowerment in villages, in faraway Rwanda. He said that the Girinka Programme will help transform villages in Rwanda.

"Being part of a transformative project towards economic development of Rwanda! PM @narendramodi donates 200 cows under #Girinka - One Cow per Poor Family Programme at Rweru village. Girinka is an ambitious projects that provides both nutritional and financial security to the poor," Raveesh Kumar, the spokesperson for the Ministry of External Affairs, tweeted.

The word Girinka can be translated as 'may you have a cow' and describes a centuries-old cultural practice in Rwanda whereby a cow was given by one person to another, as a sign of respect and gratitude, the Prime Minister's Office said in a statement.

The Girinka Programme was initiated by Kagame in response to the alarmingly high rate of childhood malnutrition and as a way to accelerate poverty reduction and integrate livestock and crop farming, the statement said. The programme is based on the premise that providing a dairy cow to the poor transforms livelihoods, reconciles communities improving agricultural productivity through the use of manure as fertilizers which would lead to improving soil quality and reducing erosion through the planting of grasses and trees, it said.

Since its introduction, hundreds of thousands have received cows through the Girinka programme. The programme has contributed to an increase in agricultural production in Rwanda - especially milk production and products, reduced malnutrition and increased incomes.