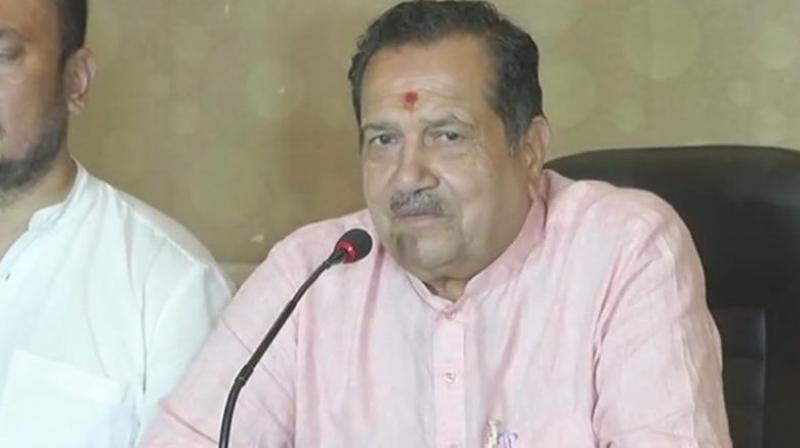 RSS leader Indresh Kumar was in Ranchi in Jharkhand to attend a programme of the Hindu Jagaran Manch on Monday. (Photo: Twitter | ANI)

Ranchi: RSS leader Indresh Kumar has said if the practice of eating cow meat was stopped, many crimes of the 'Satan' could be curtailed, in an apparent reference to the incidents of mob lynching.

Kumar was in Ranchi in Jharkhand to attend a programme of the Hindu Jagaran Manch on Monday.

"If the practice of eating cow meat is stopped, many such crimes of the 'Satan' could be stopped," he said.

The RSS leader also pointed out that killing a cow was not approved by any religion.

Meanwhile, Uttar Pradesh's Shia Waqf Board chief Waseem Rizvi also supported the statements made by the RSS leader and said that Muslims should stop eating beef.

"I think Indresh Ji's statement has a point. Religious sentiments should not be hurt. If a law is made to stop killing of cows, lynching will stop. You can't kill someone who is given the status of a mother by a community," Rizvi said.

He added, "Muslims should stop eating beef. The killing of cows should stop. The meat of cows is 'haram' in Islam as well. You can't stop mob lynching and security can't be deployed everywhere. So, a law should be made awarding strict punishment to those killing cows."

Kumar also condemned the recent assault on social activist Swami Agnivesh and said nobody has the right to hurt the sentiments of others.

Agnivesh was beaten up at Pakur in Jharkhand on July 17 allegedly by members of BJP-affiliated youth groups who accused him of speaking against Hindus.

"It is wrong and condemnable. But nobody has the right to hurt others' sentiments in the name of freedom of expression," Kumar, an executive committee member of the RSS, said. He said there was a need for a strong action against those who hurt religious faith.