The GoM will examine the recommendations and submit a final report about steps to taken to Prime Minister Narendra Modi.

New Delhi: Taking serious note of rising incidents of wanton mob lynching across the country, with the two most recent ones being reported from Alwar and Madhya Pradesh, the Modi government finally swung into action on Monday and set up two high-level committees to examine these incidents and give their recommendations, including legal framework, on how to stop these incidents.

The committee headed by home secretary Rajiv Gauba has been asked to submit its report within four weeks to a five-member Group of Ministers (GoM) which will be headed by home minister Rajnath Singh.

The GoM will examine the recommendations and submit a final report about steps to taken to Prime Minister Narendra Modi. Apart from the home secretary, the committee will include secretaries from other key ministries and departments like legal affairs as well as social justice and empowerment. 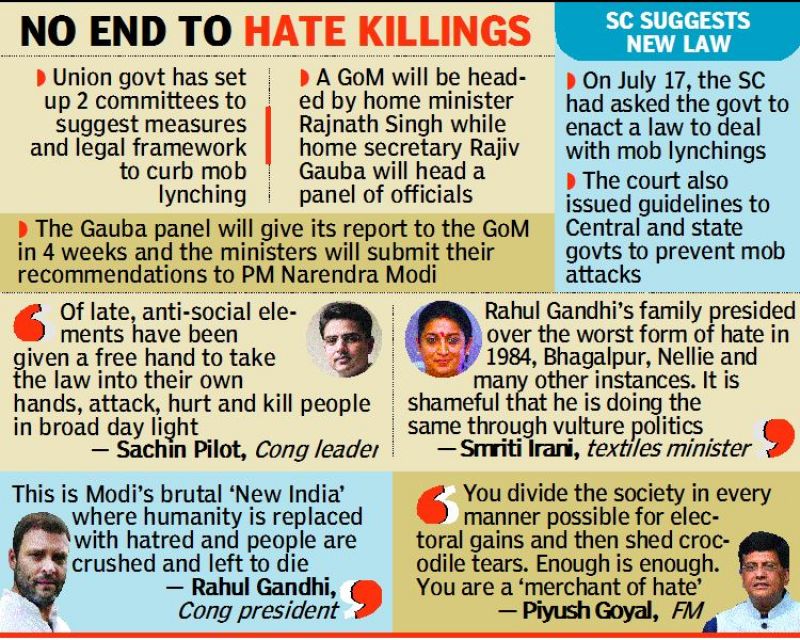 The government’s move to set up two committees came a week after the Supreme Court asked the Central government to enact a law to deal with incidents of lynching and take action on mob violence. Since the September 2015 lynching of Mohammed Akhlaq in Dadri, Uttar Pradesh, around 200 such incidents have been reported from across the country. About 90 per cent of the victims have been Muslims.

Earlier this month, on July 6, a controversy erupted after photographs of Union minister Jayant Sinha felicitating eight men convicted of killing a meat trader at his residence on the outskirts of Hazaribag went public.

On June 30, 2017, in Ramgarh, Jharkhand, 11 men, including a local BJP leader, had dragged Alimuddin, 55, out of his car and beaten him to death. The meat trader was killed on “suspicion” of carrying beef.

However, on Monday, sources said there is considerable concern in the government over increasing incidents of mob lynching in the country and even though law and order is primarily a state subject, Centre is keen to put a mechanism in place to contain that these incidents.

“Government is very serious to stop these incidents and that’s why the home secretary’s high-level committee has been mandated to suggest measures, which may also include recommending changes in existing laws, to deal with such cases. The committee will examine all aspects, including how the Centre can play a wider role in curbing these incidents, rather than leaving it to the states to handle them,” a senior official said.

Top government functionaries, sources added, discussed the recent incidents of mob lynching, particularly those related to cow vigilantes, following which it was decided to constitute the committee with clear instructions of submitting its recommendations within four weeks.

Once the committee submits its report, the GoM too, after examining its recommendations, will prepare a final report to be given to PM Modi on a priority basis.

“Since the Centre is keen to stop these incidents, the entire process is being treated as a top priority issue and the whole exercise will be completed in a time-bound manner. One of the key issues the committee will examine is whether existing laws are adequate to deal with these cases or some new mechanism and changes are required to be made,” the official added.

Meanwhile, home ministry has sought a detailed report from the Rajasthan government over the recent incident of lynching of 28-year-old Rakbar Khan. The state government has been asked specifically to give details of the “entire sequence of events and the timeline” related to the killing.

Officials claimed this was done in view of allegations that the local police wasted almost three hours in taking the victim to the hospital even though the hospital was only 6 km away. The state government has already instituted an inquiry into the alleged lapses by Alwar police.