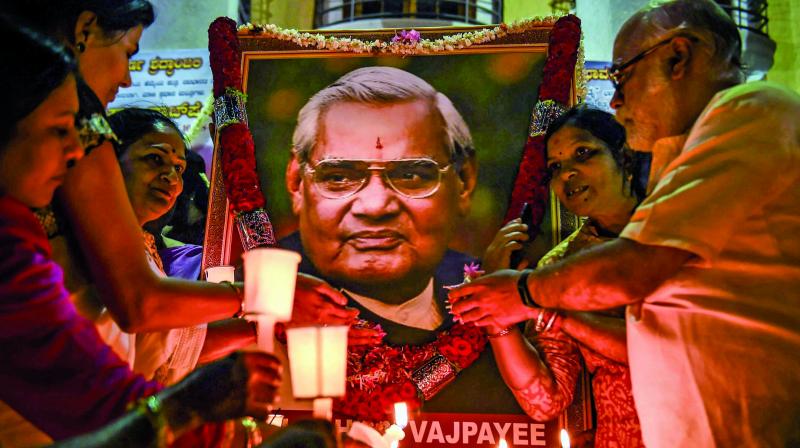 The video showed state Agriculture Minister Brijmohan Agrawal and Health Minister Ajay Chandrakar talking to each other and laughing while sitting on the stage.

The meet was held on Wednesday after ashes of the late BJP stalwart were brought for immersion in major rivers.

The video purportedly also showed a laughing Ajay Chandrakar slapping the table in front of him.

State BJP chief Dharamlal Kaushik is seen grabbing Ajay Chandrakar's hand, to indicate that they should not laugh.

Chief Minister Raman Singh was also present at the meet.

"The top BJP leadership had been ignoring Atalji when he was alive. Now this act of senior BJP ministers has clearly shown how much respect they have for their veteran leader," said state Congress general secretary Shailesh Nitin Trivedi.

"If BJP leaders can not respect Atalji, then they should not at least disrespect him. BJP and Raman Singh's (expression of) love and respect for Atalji after his death is nothing but just a show and drama," he said.

Dharamlal Kaushik, the state BJP chief, or other senior leaders of the party in the state could not be contacted for comments.