It is a time when one is cleansed of all ill-feelings and stands humbled bowing in front of the might of Nature! 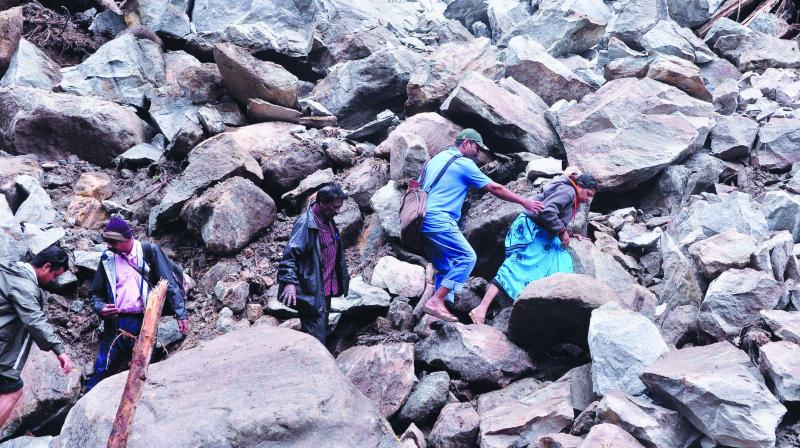 People trek through the boulders that landed near the bridge in the landslide at Kuderachola in Nelliyampathy. (Photo: Asian Age)

A relief camp is a place where preferences, prejudices, fetishes and even sense of hygiene are thrown out of the window in the interest of just holding on to dear life. Dr H. Poornima Mohan, professor at Sree Sankaracharya University of Sanskrit, Kalady, recounts her experience.

A relief camp is a unique teacher, imparting valuable lessons in survival. Your priorities could change and your likes and dislikes could go for a toss.  All are equal and equally needy of any help that comes their way irrespective of their respective economic and social status otherwise, at least in the initial stages. Even old newspapers, cartons and packing material are welcome as bedding on the floor. The experience is a great equaliser when one finds man, rodents, roaches, reptiles, bovine and dogs and cats wading (and also floating) together through the same waters at the same time. Where preferences, prejudices, fetishes and even sense of hygiene are thrown out of the window in the interest of just holding on to dear life - and to be able to save others’ lives even at risk to one’s own! It is a time when the last thing one wants is to be a burden on others and the thing one most wants us to be of some help, somehow, to someone or the other. It is a time when one is cleansed of all ill-feelings and stands humbled bowing in front of the might of Nature!

To relate my own experience, myself, my husband, about 600 students, some teachers of my university, and a few local resident- some old, some ailing, some pregnant and some with infants, found ourselves stuck on the second floor of a building in the university. We had a cow, four calves, four dogs and seven puppies also with us. The cow and one of the calves unfortunately didn't make it through to better days.

It was not an official camp. Just that we all reached there individually, finding it to be the safest place within our range. There was no power supply, no clean water, but there were space and mindset to huddle together. By day two, most people could not communicate outside. All phones were generally out of range or out of charge.

On day three, we decided to brave it and venture out and somehow get out of the self-created camp, the reason being that in the absence of the basic amenities, it was not wise to stay on and hope to retain one's sanity (and sanitation).

Moreover, it was evident that nothing much could be done anymore by staying on, while getting out held the fond hope of finding safety, help and support for oneself as well as for others. So, some of us took the lead and saw to it that everyone was out. Each chose a viable destination and mode of transport - some were taken by trucks and torsos, some by car and most, bless them, on foot against the adverse current, and by the time the noon was through, we were all off.

The next day, as and when phones could be restored, we could exchange news of each others’ progress in their respective journeys; by evening, all those in our ‘camp’ had reached their destination. I had myself reached Thiruva-nanthapuram from Kalady by midnight, thanks to a good Samaritan who risked driving us all the way out in his car in spite of not having a clue as to what awaited us once we stepped out of our safe retreat.

While most of the students (who were hostelers) returned to the safety of their homes, there were some others who were left with no safe homes and went to friends and relatives. But yes, all of us who spent three nights together are certainly safe and out of the immediate ordeal.

It was miraculous how some of the young teachers and nearly all the students rose admirably to the occasion and sustained themselves as well as others through the ordeal.

Also, there were lots of trucks (!) and other vehicles stranded at our gate. Since most phones were out of charge and communication with the outside world was next to impossible, in our desperation, we would wade through to the drivers and get them to charge our phones. They did so willingly, despite the risk of putting their own vehicles' batteries in jeopardy. I also learnt that the drivers were generously providing their fuel - free of cost, of course, to a few other camps which had generators and had use for it!

It was also amazing how the nearby shopkeepers came forward selflessly with vegetables, provisions and what not!

Having said this, I know there are many other groups huddled together like this in many places. In Kalady, we kept track of the situation. As to other places I'm yet to know fully as communication is the major snag. My own camp is dismantled, and since the waters have receded there, people from other nearby camps are also in the third and fourth stages of ‘rescue from relief’ and rehabilitation. Since I'm just back to the world, I really don't know the situation in other areas. Cut off as we were, we didn't even know about the passing away of former prime minister  A.B. Vajpayee and former UN chief Kofi Annan.

As to what one needs for rehabilitation in the coming days, once back in the mainstream, is yet to be assessed and gauged. But certainly it is going to be a different need for different persons and no gesture of help can actually be regarded as worthless.