“I was playing her for the first time but I never thought it will be an easy match. She did well.” 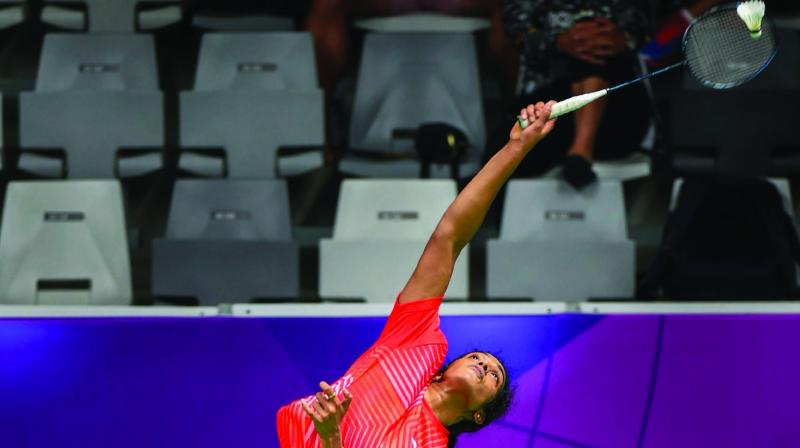 P.V. Sindhu in action against Vu Thi Trang of Vietnam in the women’s singles match in Jakarta on Thursday. (Photo: PTI)

Jakarta: P.V. Sindhu had to dig deep to down a fighting Vu Thi Trang of Vietnam but Saina Nehwal did not break any sweat as India’s top two shuttlers advanced to the women’s singles second round at the 18th Asian Games, here on Thursday.

In complete contrast, Saina just walked into the second round with a crushing 21-7, 21-9 win over Iran’s Soraya Aghhajiagha in just 26 minutes.

In the next round, Sindhu and Saina will face Indonesian opponents. Sindhu takes on Tunjung Gregoria Mariska while Saina will lock horns with Fitriani.

“I did not take it easy but that was a very good match. It was anybody’s game, each point was important. I was making too many errors. She was not leaving any shuttle. It was not allowing me to attack. There was drift here and there but we have to manage,” Sindhu said after the match.

“I was playing her for the first time but I never thought it will be an easy match. She did well.”

Talking about her second match point at 21-20 when her smash was called out, Sindhu said the line judge’s call could have cost her the match.

Saina said she had come prepared for her opponent. Asked if there could be Sindhu-Saina final, Saina said her compatriot has a better chance to make it to the final. “It’s not easy but I will try my best, she has a good chance. It’s not easy playing here. I play an Indonesian next and she will be cheered by home fans,” she said.

Also moving to next round were CWG silver medallists Chirag Shetty and Satwiksairaj Rankireddy, who got the better of Hong Kong’s Yonny Chung & Chun Hei Tam 21-12, 21-14 in men’s doubles.

In the mixed doubles, the pair of Ponappa & Satwiksairaj Rankireddy also crashed out of the Games after losing to the Thailand duo of Dechapol Puavaranukroh by a  25-27, 16-21 scoreline.

After splitting the first two games, the third game between Sindhu and Trang turned out to be a see-saw affair.

Sindhu did set up the points but was not consistent in execution. Error in judgement in leaving the shuttles from Sindhu also benefited Trang.

The Indian lost her lead in the decider for the first time when she hit one out at 9-9, looking for a winner on the left side of the Vietnamese.

After change of ends, Sindhu showed better control over shots and cut down the unforced errors to create a four-point lead, making it 16-12 but then she lost three points in a row.