India   All India  24 Aug 2020  SC refuses to entertain plea for national policy for compensation to COVID-19 victims
India, All India 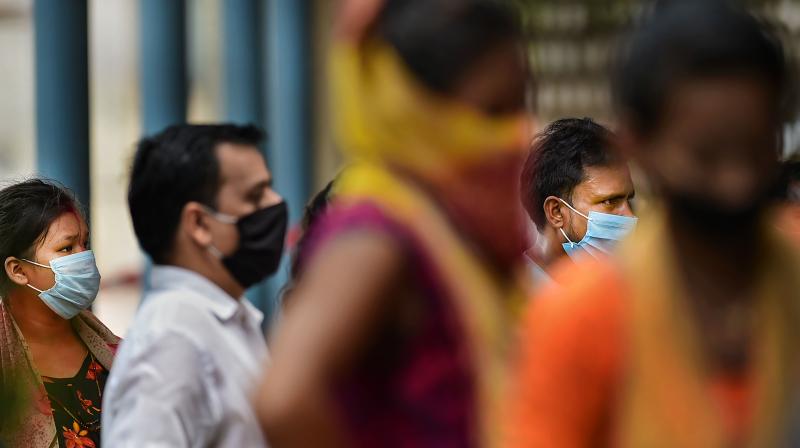 People wait for their turn to give swab samples for COVID-19 testing, at Defence Colony in New Delhi. — PTI photo

New Delhi: The Supreme Court on Monday refused to entertain a plea seeking formulation of a national policy for uniform compensation for families of those who have died due the coronavirus disease.

A bench of Justices Ashok Bhushan and R S Reddy dismissed the plea saying that every state has a different policy and gives compensation as per its financial power.

Advocate Deepak Prakash, appearing for petitioner Hashik Thayikandy, said that all he is asking for is a national policy to be formulated that would provide for uniform compensation throughout the country.

So many people have died in India due to COVID-19 and the victims are not getting equal compensation, he said.

Prakash said that in some cases, the Delhi government has given Rs 1 crore as compensation, while some states are giving Rs 1 lakh. There is no uniform policy on compensation, he said.

The bench said it is dismissing the plea, after which the counsel sought to withdraw it.

The petitioner, has also sought a direction to the Centre as well as state governments to formulate an appropriate "compensation plan" to provide ex-gratia monetary compensation to the kin of essential workers and healthcare workers who have succumbed to COVID-19.

It has urged the court to seek a status report from state governments on the total number of COVID-19-related causalities and measures taken by authorities for compensating for loss of life due to the coronavirus pandemic.

The petition claimed that a majority of the country's population belong to financially weaker sections, wherein only one person is an earning member and others in the family are solely depend on that income for their sustenance.

"The said citizens are also the tax payers of our country. In such a structure, whereby the death rate is only increasing at an alarming rate per day, it is imperative for the state to formulate appropriate guidelines, on compassionate grounds, for ex-gratia compensation to families of the COVID-19 casualties, especially for frontline workers such as doctors, nurses, paramedical staff etc., solely with the purpose of aiding the families for their basic survival and sustenance during this pandemic," the plea said.

Pertinently, "the death of an Indian citizen not only impacts his/her own personal life", but it affects the lives of all the members of the family who were dependent "on the sole source of income", it said.

"In the event of a death of such a family member and while regarding the huge unemployment which COVID-19 has encompassed globally, the dependents are with no finances for survival, the plea," filed by Prakash said.

It claimed that the death rate due to COVID-19 is exponentially increasing with each passing hour, especially in cases of frontline workers such as police officials, doctors, paramedical staff, government employees, journalists, thereby rendering the family of the deceased in an extremely vulnerable position.

"Till date, COVID-19 has no cure/vaccine and has been declared as a notified 'disaster', thus, it is the duty of the State, on compassionate grounds, to provide relief to its citizens by adequately compensating the kin of the deceased in order to financially assist the families thereof, who are in an extremely vulnerable and helpless position, having suffered due to the outbreak of this deadly virus," it said.