3 deaths were reported in Raigad, Jalna and Pune, 2 in Satara and Bhandara and 1 in Pimpri-Chinchwad, Buldhana, Nanded and Ahmednagar. 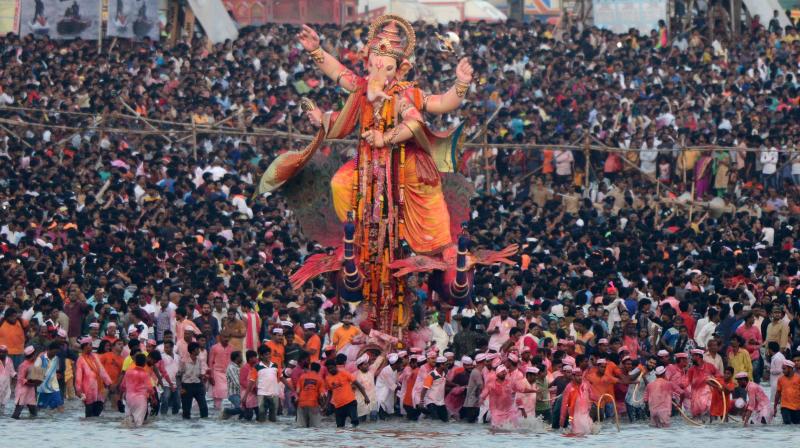 Devotees carried idols of Lord Ganesh for immersion in rivers and lakes across Maharashtra on Sunday morning, marking the culmination of the 11-day festival. (Photo: Rajesh Jadhav)

Mumbai: As many as 18 people drowned on Sunday in various parts of Maharashtra during the immersion of idols on the last day of the Ganesh festival, officials said on Monday.

Three deaths each were reported in Raigad, Jalna and Pune (Rural) districts, two each in Satara and Bhandara, and one each in Pimpri-Chinchwad (on Pune's outskirts), Buldhana, Nanded and Ahmednagar, a Maharashtra Police control room official said. Besides, one person drowned in a lake in the Kanjurmarg area of Mumbai, a police official said.

Five people were rescued after their boat tilted in the Arabian Sea near Girgaum Chowpatty in south Mumbai on Monday morning during the Ganesh idol immersion ritual, a fire brigade official said.

Devotees carried idols of Lord Ganesh for immersion in rivers and lakes across Maharashtra on Sunday morning, marking the culmination of the 11-day festival.

In big cities such as Pune and Mumbai, processions carrying huge idols of Ganesha on decorated trucks, accompanied by thousands of devotees and troupes of drummers, continued well past midnight.

While public Ganesh mandals preferred to take their idols for immersion to sea shores or rivers, families immersed their smaller idols at homes in buckets of water.

To avoid pollution of natural water bodies, many civic bodies had also set up artificial ponds for immersion.

The festival, which began on Ganesh Chaturthi on September 13, concluded on Sunday on 'Anant Chaturdashi'.

Public celebration of Ganesh festival dates back over a century when it was first encouraged by Bal Gangadhar Tilak in order to promote nationalist sentiment during the colonial rule.