Swaraj will attend the high-level event on Counter Narcotics hosted by US President Donald Trump today. 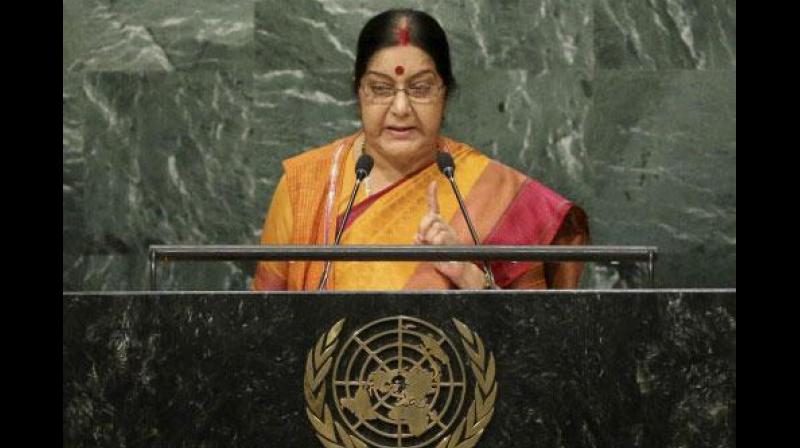 Requests have been received for about 30 bilateral meetings with Swaraj. (Photo: File | PTI)

New Delhi/New York: External Affairs Minister Sushma Swaraj will hold bilateral meetings with several of her foreign counterparts and attend multilateral meetings such as SAARC and BRICS during a busy week at the 73rd session of the UN General Assembly.

Swaraj, who arrived here on Saturday for the General Assembly week, will on Monday attend the high-level event on Counter Narcotics hosted by US President Donald Trump. The event, which kicks off the high-level UNGA week, will be a global call for action on the world drug problem and is expected to see participation from over 120 UN member states.

Requests have been received for about 30 bilateral meetings with Swaraj, said the Joint Secretary for UN Political in the Ministry of External Affairs, Dinesh Patnaik, while adressing reporters at India's Permanent Mission to the UN.

Over the course of the week, Swaraj will make a statement on climate change and participate in the NAM (Non-Aligned Movement) Ministerial conference on Palestine, besides attending other plurilateral meetings including the G4, IBSA (India-Brazil-South Africa), BRICS (Brazil, Russia, India, China and South Africa), and SAARC (South Asian Association for Regional Cooperation) - a meeting on September 27 that will also be attended by Pakistan Foreign Minister Shah Mahmood Qureshi.

Indian diplomats will also be participating in the G77, LDCs (Least Developed Countries), Commonwealth and Heart of Asia meetings to be held on the sidelines of the UNGA.

Health Minister JP Nadda will be attending the high-level meetings on tuberculosis and non-communicable diseases.

Heads of State will participate at the first-ever high-level meeting on tuberculosis (TB) on September 26 to accelerate efforts in ending TB and reach all affected people with prevention and care.

On September 27, the UNGA will stage the third high-level meeting on the prevention and control of noncommunicable diseases (NCDs), which will undertake a comprehensive review of the global and national progress achieved in putting measures in place that protect people from dying too young from heart and lung diseases, cancers and diabetes.

She also held discussions with a few members of the Indian diaspora.

Asked about the possibility of a bilateral meeting with US Secretary of State Mike Pompeo, India's Permanent Representative to the UN Ambassador Syed Akbaruddin said New Delhi and Washington just completed a successful round of 2+2 dialogue and discussions are being planned with nations with which India has not had an opportunity to hold bilateral talks.