Jean Erdman is a magical, pioneering legend whose name I would guess doesn’t ring a bell for many of you. 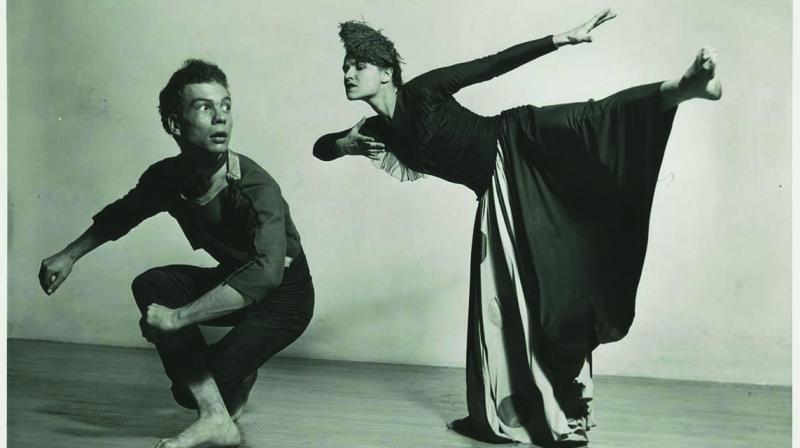 Jean Erdman is a magical, pioneering legend whose name I would guess doesn’t ring a bell for many of you. Yet she touched, influenced and transformed 20th century consciousness of myth and culture in modern dance and theatre in lasting ways.

An amazing dancer just leapt through my mind as I picked up the three-part video set Dance and Myth: The World of Jean Erdman, Part One: The Early Dances, Part Two: The Group Dances, Part Three: The Later Solos from a stack of video tapes.

Jean Erdman is a magical, pioneering legend whose name I would guess doesn’t ring a bell for many of you. Yet she touched, influenced and transformed 20th century consciousness of myth and culture in modern dance and theatre in lasting ways.

Dancer, choreographer and director Jean Erdman occupies a unique position with her genius for distilling human experience into abstract. A soloist with the Martha Graham Company from 1938 to 1943, she created many roles in the repertoire in that historic period. Later, she collaborated with many distinguished artistes including John Cage and Merce Cunningham. Her most intimate collaboration, that with her husband Joseph Campbell over a 50-year marriage, led to the profound embrace of the mythological dimension in her work. 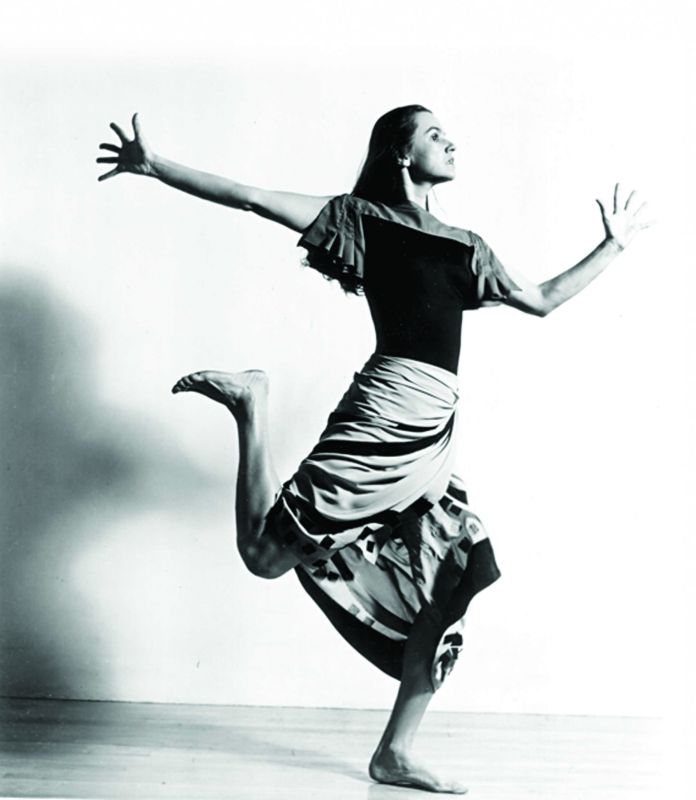 She brought her multimedia production called The Coach with the Six Insides on tour to the Detroit Institute of Arts (DIA) theatre. This adaptation of James Joyce’s, Finnegan’s Wake was presented from the perspective of the main female character Anna Livia — young woman, to old crone, to the rain that becomes a river. Musical instruments included Japanese bass drums, Tibetan cymbals, a violin and an accordion.

I was a 13-year-old theatre usher, in long white gloves and long black dress, in order to see all the productions at the DIA. The non-linear presentation combining dance, mime, and a Joycean stream of consciousness language left me baffled, but fortunately there was a second performance the next evening and suddenly everything came together as crystal clear as Yashoda’s vision of the universe in Krishna’s mouth. The visceral experience of how meaning can be obscured and revealed in a blink of consciousness has inspired me since then.

Many dance historians continue to regard The Coach with the Six Insides as “the most successful — and celebrated — attempt to unite dance and words.” I saw it on one of its several national tours after 114 award winning Greenwich Village NY performances. Discovering now that audiences also saw it in Spoleto, Paris, Dublin and Tokyo and on US television features with both Erdman and Campbell, I wonder how many others were spurred on to careers aimed at transformative experiences for audiences.

Thanks to her, the New York University Performing Arts Department was founded with a strong cross-cultural orientation. This has directly influenced the National School of Drama here and theatregoers across India through interactions with NYC directors such as Richard Scheckner.

New York Times dance critic John Martin remarked, “Erdman’s movement is perhaps as near to being non-associative as movement can be, yet it is freely creative. The method of composition, though naturally without story content, avoids any connotation of being merely decorative, much as non-objective painting avoids it, and manages to be just as strongly evocative.”

The NYC 92nd Street YM/YWHA (Young Men’s/Women’s Hebrew Association) was a vibrant centre for mid-century American modern dance. After viewing a Jean Erdman solo as part of a group concert, dance critic Edwin Derby wrote in the New York Herald Tribune, “Miss Erdman’s (approach) is a more original and refreshing one to encounter. There was a lightness in the rhythm, a quality of generosity and spaciousness in the movement that struck me as a dance should, as a poetic presence.”

Walter Terry also writing for the Tribune commented, “(Her dance) attracts through rare beauty of pattern, through gently shaded dynamics and through that intangible essence we call quality. It does not appeal directly to the intellect nor to the emotions, but rather it seems to carry its message on its own short-wave system to the senses themselves.”

So how did this American modern dancer evolve an aesthetic philosophy that encompassed world dance? To start with, her first initiation into dance was the hula in its traditional form.  She grew up in Honolulu where her father was a Christian minister to a multi-ethnic congregation, preaching in English and Japanese. At school, the Isadora Duncan style of interpretive dance was taught as physical education. Attending Sarah Lawrence College from 1934-37, she was deeply influenced by Martha Graham’s modern dance classes taught at the school and during summers at Bennington College.

The other profound influence during her Sarah Lawrence days were the dialogues with her tutorial advisor, Joseph Campbell, professor of comparative literature whom we all know as a world authority on comparative mythology. He famously said, “Follow your bliss and don’t be afraid, and doors will open where you didn’t know they were going to be.” “The cave you fear to enter holds the treasure you seek.”

The connections between mind, body and spirit and art were explored together for the rest of their lives. They married a year after her graduation on her return from a family trip around the world which gave her the opportunity to see traditional dance and theatre from India, Bali and Java and other cultures.

After her personal experience and further delving into non Western dance genres, she said, “By studying and analysing the traditional dance styles of the world, I discovered that the particular dance of each culture is the perfect expression of that culture’s worldview and is achieved by deliberate choices drawn from the unlimited possibilities of movement.”

Not letting any moss grow under her dancing feet, as soon as she returned from her trip around the world in 1938, she not only married one of the most amazingly influential thinkers on the planet but also began performing as part of the Martha Graham Dance Company.

One example of the collaboration of her dance with the work on mythology of her husband resulted in the three-part Transformations of Medusa. It began as a short study in a choreography class taught by Martha Graham’s musical director Louis Horst, required of Graham dancers. The class study was an interpretation of Horst’s concepts of pre-classic dance exploring what were envisioned as “primitive” or archaic styles of movement. She limited herself to a two-dimensional form and created a stylisation in which she said every posture contains “a whole state of being or attitude towards life.” This was identified by her husband, Joseph Campbell, as the beautiful Greek Medusa cursed to become the snake-headed gorgon who killed with her eyes and developed in the second and third sections of the dance. It remained in her repertoire from its 1942 Bennington College Festival premiere through the 1990s.

Jean Erdman toured India and Japan as a solo artist in 1954-55 and her report helped kickstart the US State Department Asian cultural exchange programs. I’ve always found it fascinating that the Martha Graham Company danced at the Regal Theatre in Delhi’s Connaught Place in 1955. Now I understand this was a direct follow-up of Erdman’s solo tour.

She was a pioneer in collaborations with the great modern musicians and artistes from the early 1940s onward relating spoken word, music and visual arts with movement. Her choreography included productions of plays by Sartre, Giraudoux, Shakespeare, E.E. Cummings and Garcia Lorca’s Yerma.

While touring extensively with her dance company, her role in dance education was more than extensive. Seventy years ago she directed the modern dance department at Teachers College of Colombia, was summer head of U of Colorado Boulder dance department, taught in her own dance studio, later chaired the Bard College dance department and was both founding director and later taught at the NYU’s Tisch School of the Arts.

Her dance teaching combined her study of world dance with kinesiology to offer what she called “a basic dance training that would, in its most elementary form give the novice an essential experience of the art form, and in more complex variations create a professional dance artiste with a completely articulate instrument capable of responding in movement to any choreographic impulse.” That totally sums up what I understood as modern dance training in the 1950s and 1960s. It was thoughtful, not locked into anything automatic and asked the dancer to be as much of a sponge as possible in absorbing literature, visual arts, music, culture and other related arts to create a meaningful performance.

New York Times dance critic Anna Kisselgoff wrote seeing the 1985 NEA-funded Jean Erdman Retrospective, “Anyone wishing to know something about where modern dance is today can find the roots in this retrospective.”

In 1990, Erdman became the founding president of the Joseph Campbell Foundation after her illustrious husband passed away in 1987. I have always lived in awe, delight and admiration of both Joseph Campbell and Jean Erdman, so perhaps I won’t toss those three VHS tapes of her world of Dance and Myth just yet.