Noting that the PM had a 'very successful' bilateral meeting with Harris, the sources said he gave very special gifts to the American VP 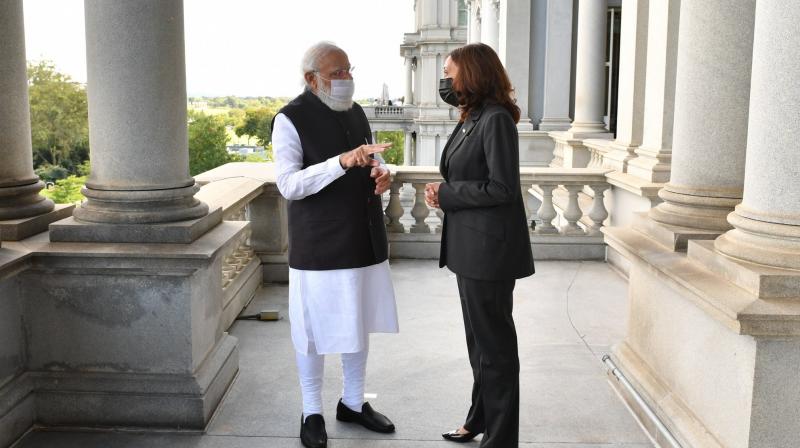 New Delhi: Prime Minister Narendra Modi gifted US Vice President Kamala Harris a copy of old notifications related to her grandfather, who was a senior Indian government officer, in a wooden handicraft frame and a 'meenakari' chess set as they held their first in-person meeting, government sources said on Friday.

Prime Minister Modi described India and America as "natural partners" in his meeting with Vice President Harris on Thursday at the White House during which they decided to further cement the Indo-US strategic partnership and discussed global issues of common interest, including threats to democracy and in the Indo-Pacific.

Noting that the prime minister had a "very successful" bilateral meeting with Harris, the sources said he gave very special gifts to the American vice president.

Modi also gifted Harris a 'gulabi meenakari' chess set, the sources said, adding that the craft of 'gulabi meenakari' is closely associated with Varanasi, one of the oldest cities of the world and the prime minister's Lok Sabha constituency.

Each piece on this particular chess set is remarkably handcrafted, the sources said.

The bright colours reflect the vibrancy of Varanasi, they said.

The ship gifted to Morrison is also distinctly handcrafted and its brightness reflects Varanasi's dynamism, they said.

Modi arrived in Washington on Wednesday on an official visit to the US during which he will hold the first face-to-face meeting with President Joe Biden, attend the maiden in-person Quad summit and address the 76th session of the UN General Assembly in New York.