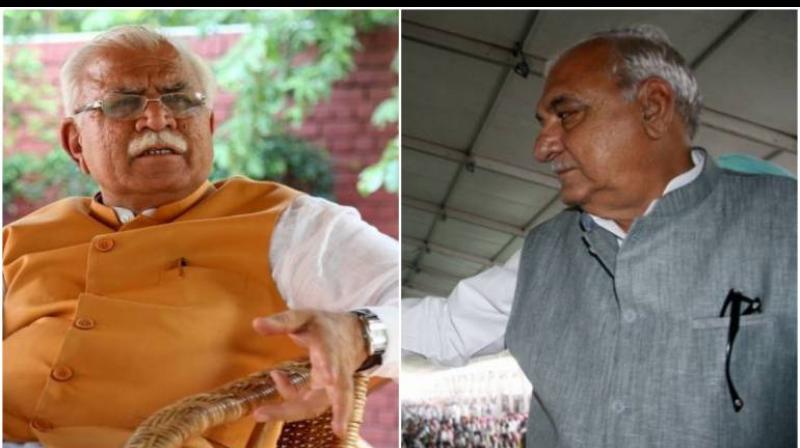 Haryana: As Haryana was headed for a hung Assembly as per the latest trends, the BJP high command is understood to have summoned Chief Minister Manohar Lal Khattar to Delhi.

According to the Election Commission (EC), the BJP, which had set a target of winning 75 seats in the 90-member Assembly, was leading in only 40 seats, while the Congress has won in 31 constituencies.

JJP leader Dushyant Chautala took a swipe at the Bharatiya Janata Party's "Mission 75", saying they would fall way short of their target of winning 75 seats. Chautala said no party would be able to form the government on its own, while adding the JJP would hold key to the formation of the next dispensation. "People of Haryana want change," he told reporters.

Defying predictions of major exit polls, the Opposition Congress did much better than expected in Haryana.

The results showed the 'Modi-wave' and nationalism did not guarantee success. Analysts felt the high-pitched campaign on the abrogation of Article 370 in Jammu and Kashmir did not move the electorate either.

This was the first test that Prime Minister Narendra Modi-led BJP faced after the landslide victory in the 2019 general elections and voters have clearly said the national and state Assembly elections cannot be fought using the same political blueprint or strategy.

Despite the Congress' poor performance in the 2019 Lok Sabha elections, problems at national leadership level and inactive participation by central leaders -- Sonia and Priyanka Gandhi -- the verdict has shown that the local leadership acted effectively and put up a stellar show.

"So far, we have not taken any call on supporting any party... we have convened the working committee meeting of the party tomorrow," Chautala said, adding his party would play a crucial role in the formation of the government.

Most exit polls had predicted a comfortable victory for the BJP, which came to power for the first time on its own in Haryana in 2014.

In 2014, BJP had won 47 seats, while the Congress was reduced to just 15 seats - coming in a distant third. Regional party Indian National Lok Dal or INLD had got 19 seats and had come in second place.

Of the 90 seats, 17 are reserved for Scheduled Castes and 73 falls under General category. This division is what comes to be the hallmark of all elections in the agriculture driven state.

The counting of votes begun at 8 am.